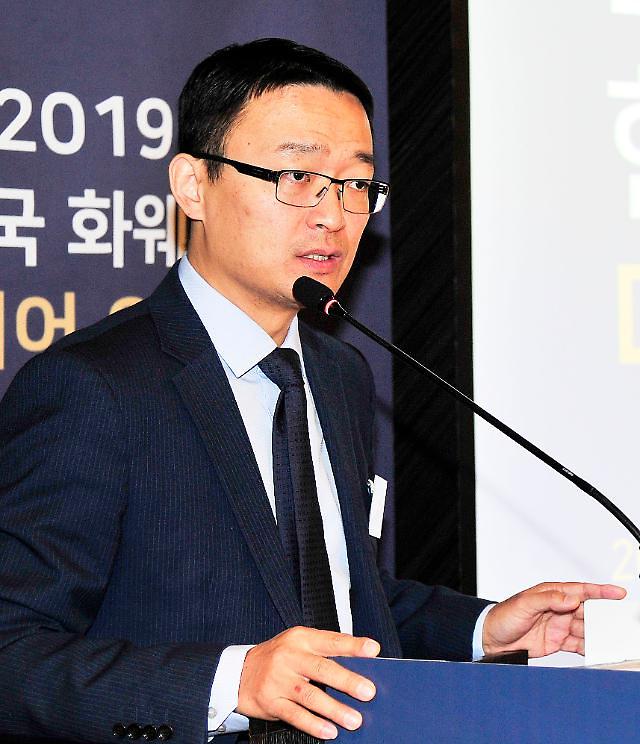 
SEOUL -- Huawei presented the goal of boosting sales of 5G equipment more than twice in South Korea next year, saying it would provide a corresponding reward if overseas clients pick the Chinese tech giant as their business partner despite U.S. sanctions.

LG Uplus (LGU+) was the only South Korean company to pick Huawei's equipment for the establishment of its 5G mobile telecom network. Two other mobile carriers, SK Telecom and KT, excluded the Chinese company, citing compatibility with 4G LTE networks. SA equipment will be introduced next year.

Meng Shaoyun, CEO of Huawei's branch in South Korea, told reporters on Friday that said Huawei is ready to supply 28GHz bandwidth equipment and SA equipment "whenever customers want." "We are trying to give faith in the quality of products," he said, citing high standards for technologies required by South Korean clients.

The Chinese company hopes to boost sales of 5G equipment in South Korea from 600,000 units this year to 1.5 million next year. In South Korea, Huawei supplied 18,000 5G base station equipment through LGU+, Huawei's global media and communications department head Karl Song said, adding Huawei is considering establishing a research and development center in the first half of next year.

Karl Song said that his company would show 'that much value" if other companies pick Huawei as their business partner despite U.S. sanctions.

Huawei opened its 5G lab on May 30 in Seoul after the Chinese company was placed on a list of foreign firms barred from receiving components from U.S. exporters without a license. Through its 5G lab, Huawei provides an optimized test environment and free services to South Korea startups and partner companies, focusing on cloud, virtual reality (VR) and augmented reality (AR), connected cars, robots, and smart manufacturing.