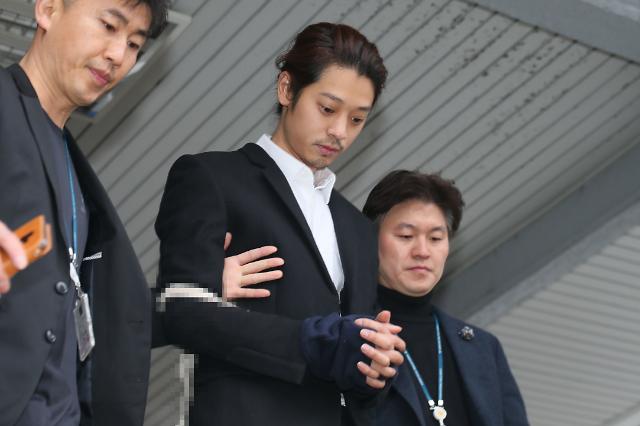 This file picture shows singer Jung Jun-young being moved from a police station in Seoul to a prosecutors' office. [Photograph by Yoo Dae-gil = dbeorlf123@ajunews.com]

SEOUL -- Jung Joon-young, a disgraced singer and TV personality, was sentenced to six years in prison on charges of filming sex videos and sharing them with other singer friends through social media chat rooms. He was also charged with raping drunken women with Choi Jong-hoon who left FT ISLAND, a popular rock band in South Korea.

A criminal district court in Seoul handed down a five-year jail sentence to Choi. The court ordered 80 hours of sexual violence treatment each and five years of employment restrictions at facilities related to children and teenagers. They were found guilty of raping drunken women in 2016.

"Strict punishment is inevitable because their crime is too serious and grave to be considered curious or playful," the court said in its verdict, rebuking Jung and Choi for regarding women as "mere sexual pleasure tools."

Jung, 30, was accused of distributing 11 sex video files and sharing them with other K-pop artists including Seungri who left his band, BIGBANG, after he was embroiled in a separate case over Burning Sun, a music and dance club associated with him.

Seungri has been the target of public criticism since a 28-year-old dance club customer claimed in January that he was brutally beaten by Burning Sun employees. An investigation exposed drug trafficking and Jung's sex video scandal that forced the departure of celebrities such as Lee Jong-hyun, a CNBLUE member.