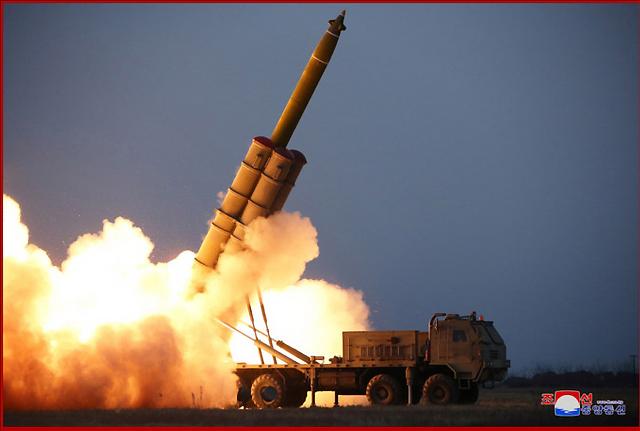 SEOUL -- North Korea's "super-large" multiple launch rocket system showed technical progress and deficiency as well in a series of test launches that began in August. The time of continuous launch was reduced from 17 minutes to 30 seconds in three months, but a launch vehicle with four tubes used fixed supports on its front and back to fire just two projectiles.

Two projectiles, launched from Yeonpo in South Hamgyong Province into waters off the east coast on Thursday, flew up to 380 kilometers (235 miles) at an altitude of 97 km, the South's Joint Chiefs of Staff (JCS) said, adding their trajectory was similar to 600-㎜ multiple rocket launchers tested on August 24, September 10 and October 31.

Pictures released through KCNA showed a projectile being fired from a transporter-erector-launcher (TEL) which used fixed support on its front and rear. The same vehicle with four launch tubes has been used in three previous launches to fire just two shots each time at intervals of 17 minutes, 19 minutes and three minutes. The interval in the latest test was narrowed to 30 seconds, demonstrating technological progress.

In its test on October 31, North Korea claimed to have successfully verified the security of a continuous fire system. However, experts in Seoul have said that it may take more time for North Korea's super-large multiple launch rocket system to use four tubes for continuous launch in a shorter time without using fixed supports.

North Korea has pushed for the development of new solid-fuel weapons to replace a stockpile of liquid-fuel short-range missiles. However, they are "notoriously inaccurate, a shortcoming that limits their military utility unless armed with nuclear warheads," Michael Elleman, a missile expert at the International Institute for Strategic Studies (IISS), said in an article published by 38 North, the website of a U.S. think tank, on October 10.

North Korea's new multiple-launch guided rocket system will increase opportunities to choose between multiple-launch rockets and "real" short-range ballistic missiles in tailoring some attacks and complicate the task of U.S. and South Korean missile defenses, Vann H. Van Diepen, a consultant who worked in a variety of positions in the U.S. Department of State, said in an article published by 38 North, the website of a U.S. think tank, in early August.