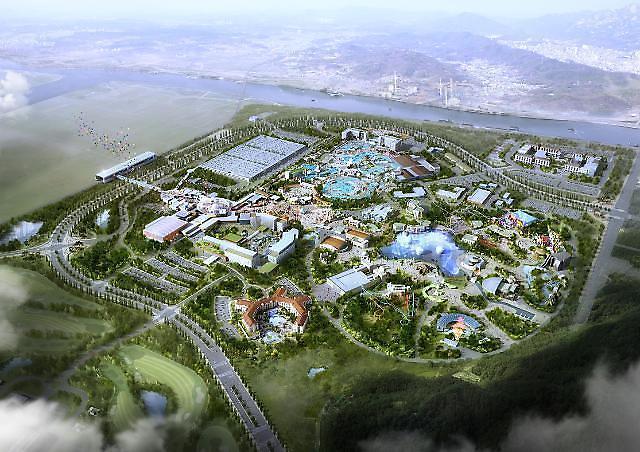 "We will not just develop a theme park, but a project that creates synergy by combining global-level accommodation, resorts, commercial facilities, golf courses and residential areas," Chung said Thursday in a ceremony to officially launch a project to build the theme park in an industrial complex in Hwaseong, about 60 kilometers (37 miles) south of Seoul.

Finance and Economy Minister Hong Nam-ki praised Shinsegae for making a bold investment in the reactivated project in Hwaseong, saying it would become a new national landmark. "The complex theme park will be established as a new landmark for our country and further serve as a historic opportunity to upgrade our tourism industry to the next level."

"It will be made to contribute to the national tourism industry and the local economy by creating a theme park that has never been seen in the world," Chung said. "We will also introduce high-tech technologies such as smart city, self-driving, artificial intelligence, and virtual reality to the entire complex so that it can become a future multi-tourism cluster where 4th industry technologies are practically implemented."

K-Water, a state water resource development and management agency, is responsible for a delayed project to build the theme park in a place that would include accommodations, a golf resort, a water park, a shopping center and other facilities.

In 2007, a consortium was formed to build the theme park amid hopes it would be up and running in 2012, but it was shelved due to an ensuing global financial crisis. The project was reactivated later and a different consortium led by Shinsegae Property, a real estate unit of the Shinsegae Group, was selected in February this year to operate the theme park.

With a proposed investment of 4.57 trillion ($3.89 billion), Shinsegae aims to break ground in 2021, open the first stage of facilities in 2026 and complete the construction of other facilities by 2031. Chung said the complex would have rides that incorporate cutting-edge IT technology, a water park, dinosaur world, a kid's park decorated with toys and characters.