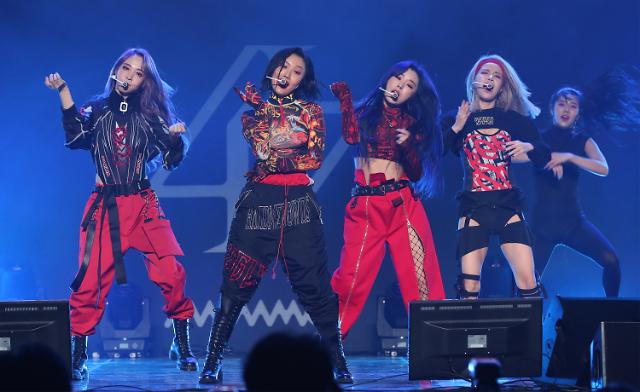 SEOUL -- Mamamoo, a powerful vocal quartet recognized for retro, jazz, R&B concepts, demonstrated its brand power as a top K-pop girl group by placing the title track and other songs of the second full-length album, "reality in BLACK," on top of South Korean music charts.

HIP, the title song of the 11-track album, which marked Mamamoo's first full-length since Melting was released in January 2016, topped three key domestic music charts and stood third in other charts on Friday. Destiny and other songs also settled at the upper ranks of the real-time charts.

For HIP's intense choreography, members threw away hand-held microphones to wear headsets for the first time since their debut in 2014. "It was so hard that I wanted to quit practicing," Solar, the group's leader, said in a showcase event on Thursday, describing HIP's choreography as the most difficult of all.

Since the group's debut in 2014, Mamamoo has created a girl crush image. Through the new album, the band wanted to show something different, Moonbyul said, adding the title song's message is about loving yourself rather than being conscious of the eyes of other people.

"I wanted to express love for myself. When I look at others, I sometimes lose myself," Moonbyul said. "If you think you're good enough, others think you're cool. I hope many of you will gain confidence through the title track." Hwasa said, "I was going to talk about a life that was not conscious of other people's eyes. I hope those who listen to this music love and cherish themselves."

Destiny was pre-released in Mnet's competition show Queendom, which saw six female K-pop acts competing in a series of preliminary performances. On October 25, Queendom's six contestants released final songs on streaming services. Mamamoo won the title with Destiny. "As we won the title with this song, I've had a lot of emotions," said Moonbyul.