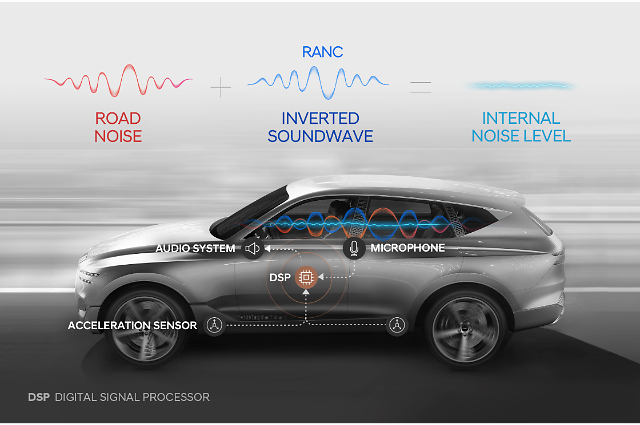 
SEOUL -- South Korea's Hyundai auto group has developed a new active noise control system that enables a nearly silent cabin environment by analyzing various types of noise such as resonant sounds created between tires and wheels or rumble sounds coming up from the road to produce inverted soundwaves.

"RANC is a remarkable technology which takes existing NVH (noise, vibration and harshness) technology to the next level," Lee Gang-deok, a researcher of Hyundai's NVH Research Lab, was quoted as saying. "We will continue to take the leading position of NVH technology and deliver the highest level of quietness to customers."

The auto group has completed domestic and American patent applications about the location of sensors and signal selection method, the core technology of RANC. The technology will be applied to an upcoming Genesis model.

Hyundai Motor said that it only takes 0.002 seconds to analyze the noise and produce an inverted soundwave, generated by the digital signal processor (DSP). RANC conducts accurate noise analysis and rapid computation to combat road noise for the driver's seat, the passenger seat and rear seats separately.