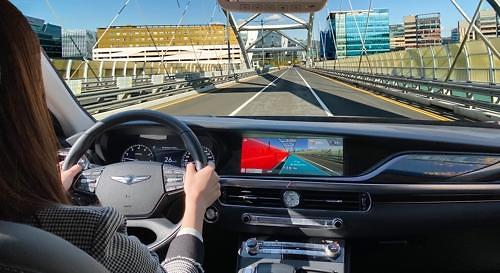 Hyundai auto group said in a statement on Thursday that the company has developed an integrated infotainment system that would provide driver-convenient services such as augmented reality (AR)-based navigation, in-vehicle payment and handwritten character recognition. The new system will be installed in Hyundai auto group's next-generation vehicles starting with the upcoming model for "Genesis", Hyundai's luxury car brand.

The most notable feature of the new infotainment system is the AR-based navigation service. Unlike conventional path-finding services which displayed routes to a driver's destination over a map, the new system shows routes over real-time view of the road ahead to prevent the driver from taking a wrong turn.

The infotainment also features an in-vehicle payment service that allows the driver to pay for gas and other services without getting out of the car. The autonomous payment system will also support membership cards. The handwritten character recognition service allows the driver to control his or her car's features by writing words directly on the display of the infotainment system with a finger. It can also recognize and understand the driver's voice commands.

To create an autonomous and connected vehicle ecosystem, Hyundai auto group has forged partnerships with various tech companies. In August this year, Hyundai partnered with South Korean tech giant LG to adopt a 30-inch wide digital display cluster which has been adopted by premium vehicles such as Mercedes Benz's E-Class.

In partnership with Kakao, South Korea's web service giant, Hyundai adopted an artificial intelligence (AI) voice assistant to the revamped version of "Sonata", released in March this year. The AI voice assistant helps a driver to maintain his eyesight on the road ahead while carrying out tasks such as sending text messages.