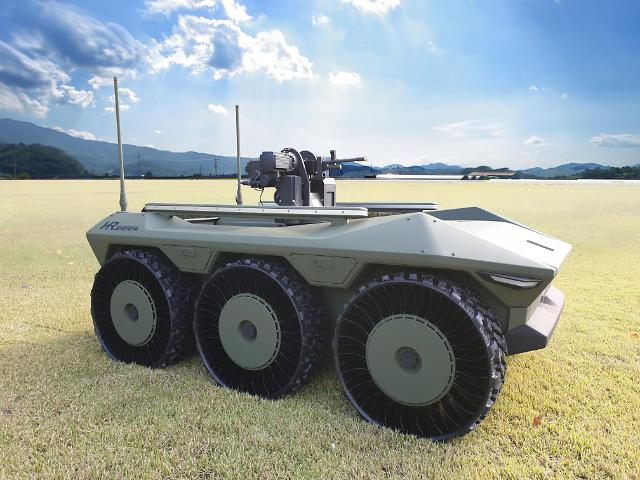 SEOUL -- KT, a top telecom company in South Korea, partnered with Hyundai Rotem, a key subsidiary of the Hyundai auto group, to develop a 5G-based unmanned group vehicle and related technologies that could be used diversely at industrial sites and battlefields.

KT said in a statement on Tuesday that the two companies would develop a control tower platform and a remote operation system for autonomous ground vehicles in a joint project that would begin with the demonstration of a 5G-connected version of "HR-Sherpa", a small unmanned ground vehicle (SUGV) developed by Hyundai Rotem.

The demonstration will take place in December in Seosan some 100 kilometers (62 miles) southwest of Seoul to test the SUGV's ability to make aerial surveys and deliver parcels. KT said the SUGV interlinked with a 5G-based control tower platform can be used at construction sites and for logistics, reconnaissance and security.

As a key defense contractor, Hyundai Rotem has invested in the development of unmanned military systems including SUVGs, wearable exoskeleton robot suits and mine-detecting robots. HR-Sherpa was showcased at a robot exhibition held in Goyang, a northwestern satellite city of Seoul in October last year.

Originally, HR-Sherpa was developed as an electric-powered infantry-supporting unmanned vehicle that can run at a maximum speed of 30 km per hour. A water-cooled battery system and an integrated heat management system enable long-distance driving and all-season weather operations. Along with firepower support, reconnaissance and the delivery of goods, it can implement remote-controlled functions and dependent driving that automatically follows soldiers in front of a vehicle.

"Based on the business agreement with Hyundai Rotem, we will extend 5G-based autonomous driving technology to not only construction sites but also the defense industry," KT's Connected Car Biz Center head Choi Kang-rim was quoted as saying. "We will continue to carve out a new mobility market."

KT has developed autonomous technologies and platforms. In April, the company joined hands with Unmanned Solution, a Seoul-based autonomous driving technology company, to commercialize a 5G network for automated shuttle service inside controlled environments such as theme parks and industrial complexes. In October, KT partnered with Hyundai Engineering and Construction in October to co-develop 5G-based technologies for automated robots.

Hyundai Rotem showcased HR-Sherpa at a robot exhibition held in Goyang, a northwestern satellite city of Seoul in October last year. Hyundai Rotem had said that it plans to continue to make investments in unmanned military systems including SUVGs, wearable exoskeleton robot suits and mine-detecting robots as the company's new growth engine.