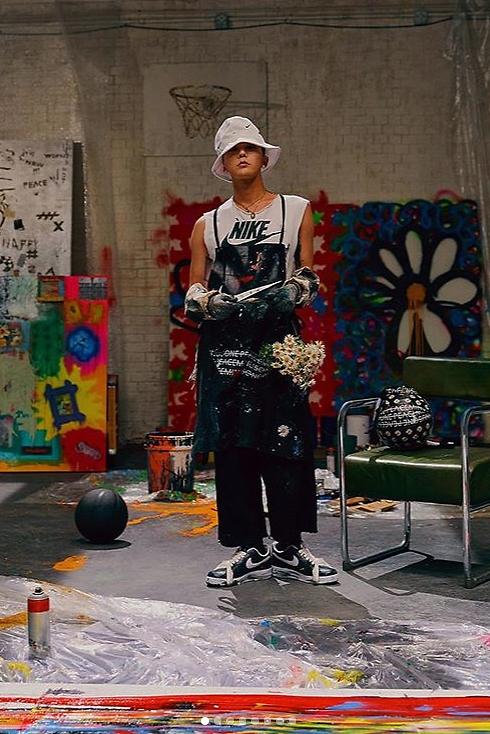 SEOUL -- BIGBANG member G-DRAGON, who completed his military duty in October, resumed public activities by cooperating with Nike, an American sportswear company, to release new sneakers called "AF1 PARA-NOISE", as two of his colleagues are set to be discharged soon from obligatory military service.

Nike said Monday that Nike Air Force1 would show a bold and innovative style by adding G-DRAGON's fashion brand, PEACEMINUSONE, which was symbolized by Daisy flowers. The singer hoped that it would be the beginning of an innovative style that incorporates "different perspectives, circumstances or tastes."

G-DRAGON was discharged on October 26 after a military service at a front-line unit north of Seoul. Separately, YG Entertainment said two other BIGBANG members, Daesung and Taeyang, would be discharged together on November 10.

In July, TOP ended his obligatory service and promised to "repay" for disappointments he had caused by smoking marijuana. The singer started his service as a conscripted policeman in February 2017, but he was expelled for smoking marijuana. He was later deployed at a district office in Seoul as a public service worker.

Seungri left the band in March this year after he got caught up in a scandal over "Burning Sun", a music and dance club in southern Seoul. He has been accused of arranging sex services for business favors in a bid to attract money from foreign investors.

Seungri has been the target of public criticism since a 28-year-old dance club customer claimed in January that he was brutally beaten by Burning Sun employees. An investigation exposed drug trafficking and a sex video scandal that forced the departure of celebrities. Jung Joon-young, a singer-songwriter, was arrested for posting illegally filmed sex video files.