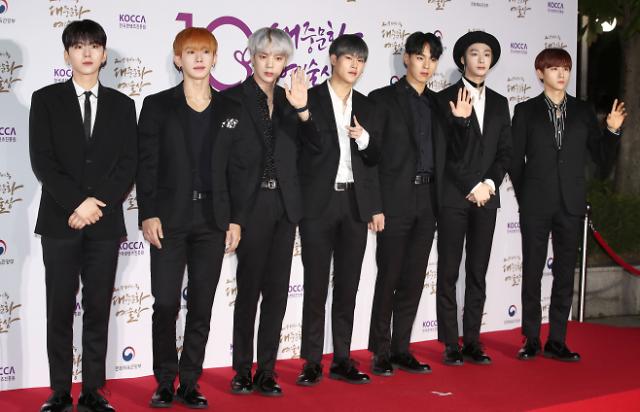 SEOUL -- MONSTA X will continue promotions as a six-member group after one member left after he was entangled in a scandal that sparked online accusations about his inappropriate personal life.

The K-pop band was in trouble soon after it came back on October 28. In social media posts, a former female idol band trainee accused Wonho, 26, of failing to pay back 30 million won ($25,642) in borrowed money.

Wonho announced his departure in a handwritten letter on Thursday saying he could no longer bear the burden of watching other people suffer because of him.

Starship Entertainment said in a statement that the group would continue activities as a six-member system without Wonho. The agency threatened to take legal actions against malicious and distorted claims.

In separate accusations, Han Seo-hee, a former idol trainee who has revealed dark secrets of K-pop artists, argued that Shownu, a 27-year-old MONSTA X member, has been in an inappropriate relationship with a married woman. The agency said Shownu stopped contacting the woman after knowing that she was married.

MONSTA X, which debuted in 2015, is gaining popularity in the United States and Europe. "FOLLOW: FIND YOU", the band's new album released on October 28, and songs included in the album are not doing well on charts operated by South Korean music services.