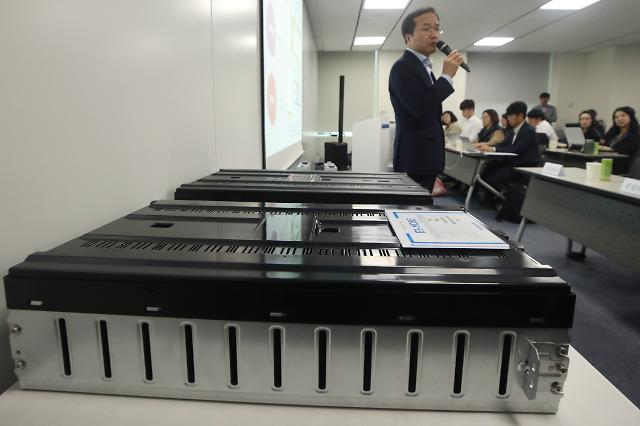 SEOUL -- Samsung SDI, the battery-making unit of South Korean tech giant Samsung Electronics, has developed a special fire extinguishing system for facilities that store electricity generated by clean energy power plants as a solution to stop a streak of fires that have destroyed more than 20 energy storage facilities since August 2017.

Samsung SDI said on Monday that the company has developed a special fire extinguishing system that would fundamentally stop fire from spreading even if there is a case of battery cell combustion inside an ESS.

New ESS facilities will be equipped with the new system. The company decided to pay for safety upgrades for some 1,000 existing ESS facilities. The upgrade will cost up to 200 billion won.

Heo said that the new system would also prevent nearby cells from overheating. Other undamaged cells would cool off over a long period, maintaining its normal state.

South Korean tech companies such as LG Chem has jumped into the rapidly growing ESS market. While LG Chem focuses on establishing a network of ESS grids using lithium-ion batteries, the Hyundai auto group partnered with a state nuclear power company in September to use recycled electric car batteries in ESS facilities.