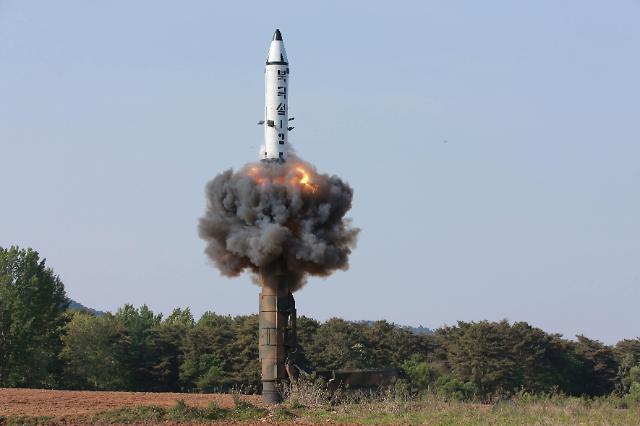 SEOUL -- Since May this year, North Korea has tested new solid-fuel short-range ballistic missiles, probably designed for the precision delivery of conventional warheads, to replace a stockpile of liquid-fuel missiles which are "notoriously inaccurate," but full development will require additional flight tests, an international missile expert said.

Since the late 1980s, North Korea has deployed relied on liquid-fuel Hwasong 5 and 6 SRBMs, based on Soviet-made Scud missiles, that can strike targets at a range of 300 and 500 km respectively, but they are "notoriously inaccurate, a shortcoming that limits their military utility unless armed with nuclear warheads," Michael Elleman, a missile expert at the International Institute for Strategic Studies (IISS), said in an article published by 38 North, the website of a U.S. think tank.

From 2015, North Korea initiated test launches aimed at improving the accuracy of Hwasong 5 and -6 missiles by equipping them with maneuverable warheads, Elleman said, adding new SRBMs appear to be designed for the precision delivery of conventional warheads, though one or two of them may be dual-capable.

Pyongyang has also introduced the solid-fuel KN-02 Toksa modeled after the Soviet-designed Tochka (SS-21) which has a range of up to 120 km and the apparent success in developing Toksa may have convinced the regime to apply similar technologies and techniques to other missiles, the expert said, referring to new systems -- KN-23, KN-24, KN-25 and KN-09.

-- The KN-23, whose external features closely resemble the Russian Iskander missile, can possibly fly more than 600 km, while the KN-24 has been tested to a range of up to 400 km. KN-23 and KN-24 missiles are likely armed with either a unitary warhead containing roughly 400 to 500 kg of high-explosives, or a submunition warhead packed with a few hundred smaller charges.

"All four missile variants employ flattened trajectories to ensure that they remain below an altitude of about 50 km, where the atmosphere is dense enough to effect course corrections using aerodynamic surfaces over the missile’s entire flight path," Elleman said, adding they should be capable of "active steering throughout flight and diving toward a designated target to achieve highly accurate delivery of warhead," he said.

Based on North Korea’s experience developing the KN-02 missile, it seems likely that each new missile system currently being developed will require a similar number of test launches, but North Korean leaders may have been already satisfied with the test results achieved to date, the expert said. "In this case, the last remaining hurdle would be missile reliability and the proven knowledge that they perform as designed under a variety of operational conditions."