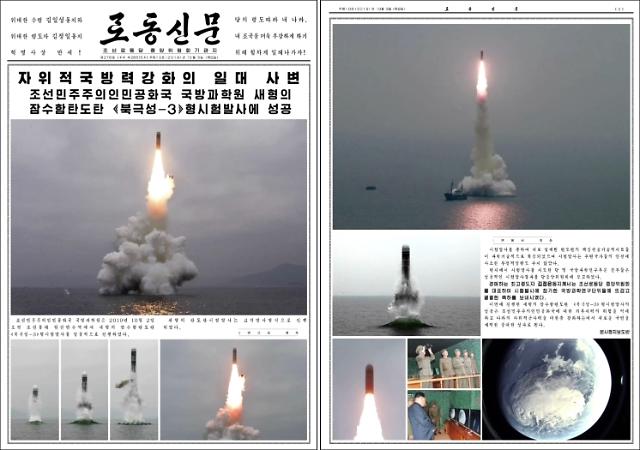 
SEOUL -- North Korea's new submarine-launched ballistic missile represents "another step forward in the pursuit of a sea-based deterrent force, an international missile expert said, characterizing it as the longest-range solid-fuel missile the nuclear-armed country has tested to date.

The North claimed to have successfully tested a new-type SLBM called Pukguksong-3 on October 2, saying it scientifically and technically confirmed "key tactical and technical indexes" of the newly- designed missile. Specifications and other information were not given, but the launch sparked a security alarm ahead of the planned resumption of denuclearization talks between Washington and Pyongyang.

North Korea's long-range ballistic missile program, coupled with the development of SLBMs, has been a prime security concern in Seoul and Washington, though US experts believe Pyongyang is still years away from the operational deployment of an SLBM submarine carrying ballistic missile for wartime missions.

"The Pukguksong-3 represents another step forward in North Korea’s pursuit of a sea-based deterrent force," Michael Elleman, a missile expert at the International Institute for Strategic Studies (IISS), said in an article published by 38 North, the website of a U.S. think tank.

North Korea tested its first SLMB called Pukguksong-1 (KN-11) on April 23, 2016, but it flew about 30 kilometers. The second one tested four months later traveled about 500 km. An intermediate-range ballistic missile called "Pukguksong-2 (KN-15)" tested on February 12, 2017, was land-based and canister-launched.

South Korea's Defense Minister Jeong Kyeong-doo said the missile launched in waters near Wonsan flew some 450 km at a maximum altitude of 910 km. The two-stage, solid-fuel Pukguksong-3, if launched in a standard trajectory, would have covered 1,900 to 2,000 km, making it "the longest-range solid-fuel missile North Korea has tested to date," Elleman said.

Photographs released by Pyongyang show a missile breaching the sea's surface after being ejected from an underwater launch tube and then igniting its first-stage motor. the expert said. The missile was likely launched from a submersible barge rather than a submarine, as evidenced by the nearby surface ship that presumably towed the barge to a safe off-shore location."

Pukguksong-3 has a substantially shortened and blunted nose cone, which was likely adopted to fit the missile into a submarine-launch tube, Elleman said, comparing it to U.S. Poseidon and Trident SLBMs and China's JL-2 with eight multiple warheads.

"North Korea will also need to build at least three, if not four or five submarines to ensure a constant at-sea presence for the second leg of its strategic arsenal, making operationalization of its SLBMs at least a half-dozen years, or possibly longer, away," said Elleman.

At an inter-Korean summit in September last year, Kim said he would permanently dismantle facilities for long-range ballistic missile launches and engine testing in the Sohae space center in the presence of international inspectors. Sohae has played an important role in the development of intercontinental ballistic missiles (ICBMs).