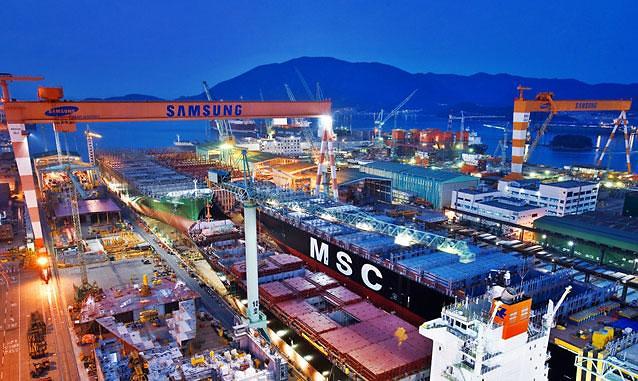 SEOUL -- As part of efforts to reduce greenhouse emissions from ships, Samsung Heavy Industries, a shipbuilder in South Korea, has developed technology to build the world's first Aframax fuel cell crude oil tanker through cooperation with Bloom Energy, an American producer of solid oxide fuel cells which use natural gas.

Aframax is a medium-sized crude tanker with a deadweight tonnage ranging between 80,000 and 120,000. Samsung Heavy said greenhouse gas emissions will decrease by more than 45 percent if fuel cells are applied to an Aframax crude oil tanker.

Samsung Heavy said it has conducted joint research with Bloom Energy to improve system stability while developing independent core processes including a fuel supply system and a power control system. The company said it can use a bulky fuel cell without changing the ship's shape.

South Korean shipyards have developed eco-friendly ships as the amount of sulfur emanating from ships should be reduced from 2020 under new rules imposed by the International Maritime Organization (IMO), a U.N. maritime safety agency. Natural gas has been recommended as a proven commercial solution to meet ever-tightening emissions requirements.

There are many types of fuel cells, but experts have considered SOFCs to hold the greatest potential of any fuel cell technology due to their extremely high electrical efficiencies and low operating costs. SOFCs are now emerging as the fastest-growing fuel cell segment, thanks to a growing demand for energy diversification and the employment of alternative energy sources.

On September 24, SK Engineering & Construction signed a joint venture agreement with Bloom Energy to develop and produce solid oxide fuel cells targeting domestic and foreign customers. The joint venture would be established in November with production expected to begin in the first half of 2020.

SOFCs can use hydrogen fuel, and Samsung Heavy said it has secured a base technology for building hydrogen fuel cell ships in the future.

South Korea has unveiled a fresh energy roadmap to secure its firm leadership in the global market for hydrogen fuels cell electric vehicles. Because of its eco-friendly characteristics, fuel cells are considered the next-generation renewable power source, and President Moon Jae-in has envisaged a "hydrogen economy" to use fuel cells in the production of automobiles and electricity.