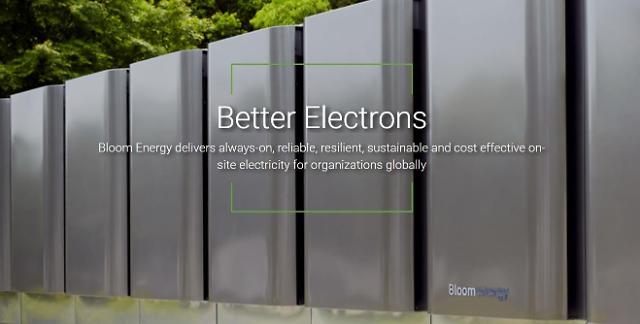 
SEOUL -- In an effort to make a quick foray into emerging fuel cell markets in South Korea and other countries, SK Engineering & Construction, a unit of South Korea's SK Group, has signed a joint venture agreement with Bloom Energy, an American public company, to develop and produce solid oxide fuel cells targeting domestic and foreign customers.

Bloom Energy, headquartered in San Jose, California, produces solid oxide fuel cells (SOFC) and power generators under a government incentive program for green energy. Instead of precious metals, Bloom Energy's fuel cells use wafers made from sand. As the fuel passes over sand wafers, it mixes with oxygen, creating a chemical reaction that produces electricity.

SOFC, an electrochemical conversion device that produces electricity directly from oxidizing a fuel, has a wide variety of applications, from use as auxiliary power units in vehicles to stationary power generation.

There are many types of fuel cells, but experts have considered SOFCs to hold the greatest potential of any fuel cell technology due to their extremely high electrical efficiencies and low operating costs. SOFCs are now emerging as the fastest-growing fuel cell segment, thanks to a growing demand for energy diversification and the employment of alternative energy sources.

The joint venture agreement was signed on September 24 at the SK E&C's headquarters in Seoul. SK E&C will control 49 percent of the joint venture and Bloom Energy owns 51 percent. The joint venture will be established in November with production expected to begin in the first half of 2020.

The joint venture is part of SK E&C's efforts to expand its presence in the fuel cell market. In November last year, the company secured an exclusive right to sell Bloom Energy servers, known as Bloom Boxes, in the domestic market, followed by a series of contracts to get involved in the construction of fuel cell plants.