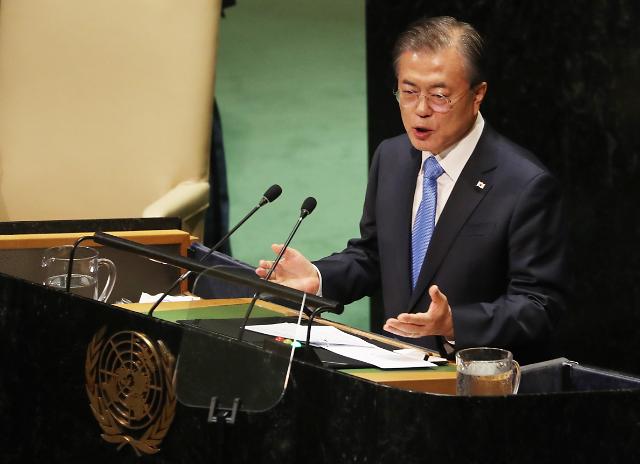 
NEW YORK -- South Korean President Moon Jae-in on Tuesday proposed transforming the Demilitarized Zone (DMZ), which bisects the Korean Peninsula, into an international peace zone with the help of the United Nations.

He put forward the idea while addressing the 74th session of the U.N. General Assembly in New York. The DMZ, which cuts across the middle of the peninsula, is a "colossal green zone" that stretches 250 kilometers from east to west and 4 km from north to south.

He hopes to designate the area connecting the truce village of Panmunjom and Kaesong, a North Korean border town, as a "Peace and Cooperation District." "If the DMZ comes to house U.N. offices already stationed in the two Koreas and other international organizations related to peace, ecology and culture and emerges as a center for research on peace, peacekeeping, arms control and trust building, it can become an international peace zone in name as well as substance," the president said.'

Once peace is established between the two Koreas, Moon added, his government will work together with the North to inscribe the DMZ as a UNESCO World Heritage Site. In their historic Panmunjom summit on April 27 last year, Moon and the North's leader Kim Jong-un agreed to turn the DMZ into a peace zone by ceasing all hostile acts and eliminating their means, such as broadcasting through loudspeakers and distribution of leaflets.

Moon's offer at the U.N. is meant to upgrade the inter-Korean summit deal on the peaceful use of the DMZ. He's seeking the U.N.'s participation in the Korea peace process and a systemic approach to provide the North with security guarantees, supported by the international community. For Pyongyang, a security guarantee is a major political incentive in return for denuclearization.

"The establishment of an international peace zone will provide an institutional and realistic guarantee to North Korea's security," Moon said. If done, it would also contribute to peace and stability in Northeast Asia, enabling the Korean Peninsula to serve as a "bridge" to connect the continent and the ocean.

"The vision of an East Asian Railroad Community in which six Northeast Asian countries and the United States take part could also become reality," Moon said.

A North Korean official apparently from the country's diplomatic mission to the U.N. was seen present at the General Assembly Hall and listening to Moon's address. Pyongyang has not sent any high-level delegation to this year's session.

The proposal came as Pyongyang and Washington are expected to restart nuclear talks as early as next month. A day earlier, Moon and U.S. President Donald Trump had summit talks here and exchanged ideas on how to produce a significant agreement in the working-level negotiations. Creating an international peace zone in the DMZ does not violate U.N. sanctions against the North Korean regime.

Moon also suggested that U.N. member states take part in the elimination of an estimated 380,000 anti-personnel mines laid in the DMZ. "It is expected to take 15 years for South Korean troops to remove them on their own. However, cooperation with the international community, including the United Nations Mine Action Service, will not only guarantee the transparency and stability of de-mining operations, but also instantly turn the DMZ into an area of international cooperation," he stressed.
(Yonhap)