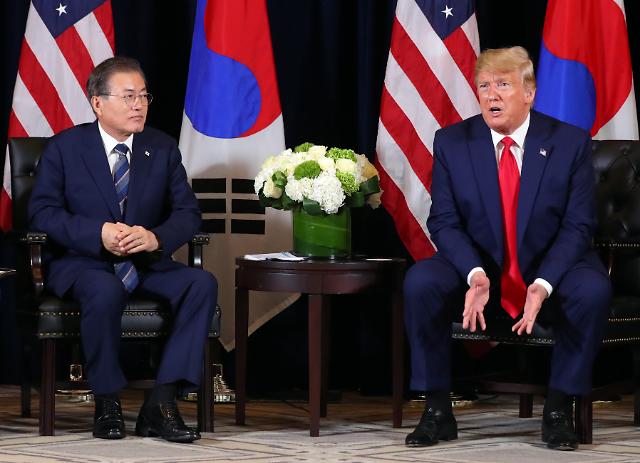 WASHINGTON -- U.S. President Donald Trump said that another meeting with North Korean leader Kim Jong-un may happen soon, although likely after there has been progress in working-level denuclearization negotiations.

Arriving at the United Nations headquarters in New York to attend the U.N. General Assembly, Trump was asked by a reporter when he plans to meet with Kim. "It could happen soon," he replied.

Later Trump added a caveat at the start of a meeting with South Korean President Moon Jae-in, who has been credited with driving the diplomatic process with the North, including by holding three summits of his own with Kim last year. "I want to know what's going to be coming out of it. We can know a lot before the summit takes place," he said. "But we'd like to see if we can do something. And if we can, that would be great. And if we can't, that's fine."

Trump and Kim have had three meetings since June 2018 to negotiate the dismantling of North Korea's nuclear weapons program in exchange for U.S. economic and political concessions. Talks have stalled since their second summit in Vietnam in February ended without a deal, but working-level negotiations are expected to resume in the coming weeks in line with an agreement between Trump and Kim at their third meeting at the inter-Korean border in June.

Speaking Monday at the start of a meeting with Singapore's prime minister in New York, Trump said denuclearization talks with North Korea are "moving along pretty well." He also deflected criticism that his first summit with Kim produced only a vague agreement committing the North to "work toward" complete denuclearization of the Korean Peninsula.

"We had a very successful meeting with Kim Jong-un of North Korea, and it was in Singapore," he said. "People don't give that meeting as much credit as it deserves. The relationship was established, and it was a tremendous success."
(Yonhap)