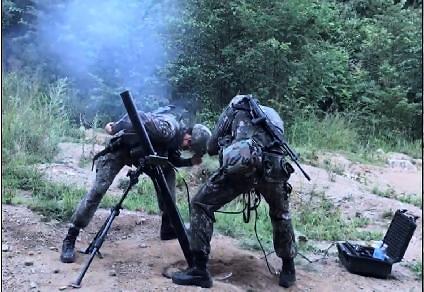 
SEOUL -- The upgraded and digitized version of an 81-millimeter mortar made its debut in South Korea, using laser and a location information system for the automatic calculation and transmission of firing information that has greatly improved the speed and accuracy of shelling.

An 81 mm mortar is a smooth-bore, muzzle-loading, high-angle-of-fire weapon used for long-range indirect fire support to light infantry, air assault, and airborne units across the entire front of a battalion zone of influence.

The Defense Acquisition Program Administration (DAPA), a state body controlled by the defense ministry, said Thursday that Hyundai Wia, a Hyundai auto group unit which produces defense products, aircraft parts and heavy machinery, has completed the "system development" of the 81 mm mortar-II that began in December 2014.

"We expert exports when mass-production is made," the agency said in a statement, adding that the automatic calculation and transmission of firing information using laser and the global positioning system (GPS) has greatly improved the speed and accuracy of shelling, compared to previous manual input and transmission.

"The successful development of the 81-millimeter mortar-II with advanced digital technology will further strengthen the infantry unit's ability to conduct operations against security threats across the entire front," Kim Ki-taek, head of DAPA's maneuver and firepower division, was quoted as saying. "We will provide support so that it can contribute to strengthening the competitiveness of the defense industry through future overseas shipments."

The new mortar improved its mission performance by digitizing the entire process from observation to firing, thereby increasing the speed and accuracy of artillery fire. DAPA said that the new mortar reduced weight by 20 percent and the number of operating personnel from five to four, with dedicated vehicles enhancing maneuverability for rapid movement.