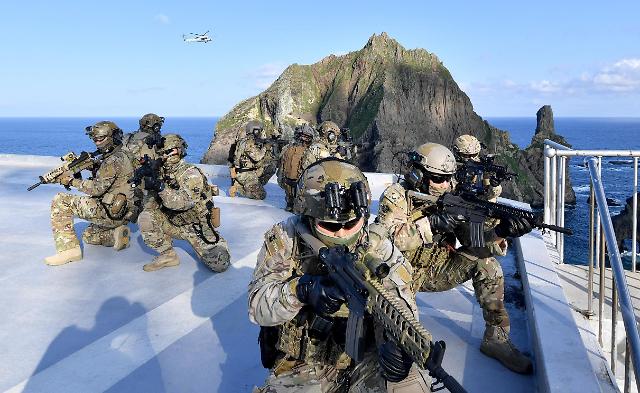 .[Courtesy of the Navy]


SEOUL -- At the height of a diplomatic dispute over trade restrictions, South Korea completed a two-day exercise aimed at showing a firm stance to safeguard its sovereignty around a chain of islets located in the middle of waters between the Korean peninsula and Japan following the termination of a bilateral pact on sharing sensitive military information.

The exercise came after South Korea refused to extend the General Security of Military Information Agreement (GSOMIA) that demonstrated President Moon Jae-in's determination to fight back against what he called Japan's "reckless" trade retaliation orchestrated by Prime Minister Shinzo Abe.

Japan expressed regrets and lodged complaints through a diplomatic channel against the exercise around Dokdo, but South Korea rebutted Japan's territorial argument, saying it is not aimed at any specific countries but to better fend off potential threats from "all forces." The South Korea-controlled islets have been the source of diplomatic wrangling due to Japan's consistent claim.

"It is an exercise literally to protect our sovereignty and territorial integrity. We didn't make such a decision just because we thought of one country," presidential spokesperson Ko Min-jung said on Sunday. "It is a drill to protect territory and sovereignty against all forces and we are not carrying it out to target a specific country."

South Korea condemned the unprecedented intrusion in July as a serious security issue as it followed a joint flight by Russian and Chinese bombers through an air defense zone claimed by Seoul.