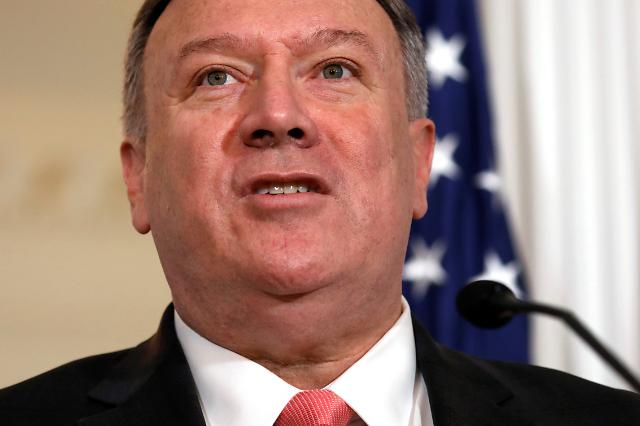 WASHINGTON -- The United States expressed "strong concern" and "disappointment" after South Korea withdrew from a military intelligence-sharing pact with Japan. Earlier, Seoul announced its decision to end the General Security of Military Information Agreement amid a bilateral dispute over trade and history.

In a rare public rebuke of its South Korean ally, the U.S. State Department and the Pentagon expressed their displeasure with the move.

" We're disappointed to see the decision that the South Koreans made about that information-sharing agreement," U.S. Secretary of State Mike Pompeo told reporters at a joint press conference with his Canadian counterpart in Ottawa, Canada. "We were urging each of the two countries to continue to engage, to continue to have dialogue," he said, adding that he spoke with South Korean Foreign Minister Kang Kyung-wha in the morning.

Still, Pompeo voiced hope that South Korea and Japan will begin to mend their ties in consideration of the important work the three countries do together. "We hope each of those two countries can begin to put that relationship back in exactly the right place," he said. "It's absolutely valuable not only to the work you mentioned in the context of North Korea, but important in the work we do all around the world."
The Pentagon echoed Pompeo's remarks.

"The Department of Defense expresses our strong concern and disappointment that the Moon Administration has withheld its renewal" of the agreement, Pentagon spokesman Lt. Col. Dave Eastburn said in a statement, referring to South Korean President Moon Jae-in.

"We strongly believe that the integrity of our mutual defense and security ties must persist despite frictions in other areas of the ROK-Japan relationship. We'll continue to pursue bilateral and trilateral defense and security cooperation where possible with Japan and the ROK," he added. ROK stands for South Korea's official name, the Republic of Korea.'

The two statements came only hours after a South Korean presidential official told reporters that the U.S. had expressed its understanding of Seoul's decision.

The Pentagon even replaced an earlier iteration of its statement, which had called on South Korea and Japan to work together to resolve their differences. "I hope they can do this quickly," Eastburn had said. "We are all stronger -- and Northeast Asia is safer -- when the United States, Japan and Korea work together in solidarity and friendship. Intel-sharing is key to developing our common defense policy and strategy."

Asked by Yonhap News Agency to explain the replacement, the spokesman did not immediately give a response. But a U.S. government source made clear that Washington was irked by the South Korean presidential official's remarks.

"We are especially unhappy that the South Korean government is saying it had U.S. understanding. Not true," the source told Yonhap on condition of anonymity. The U.S. has filed a complaint with South Korean officials in Seoul and Washington over the assertion, "in addition to expressing our unhappiness with the actual decision," the source added.
(Yonhap)