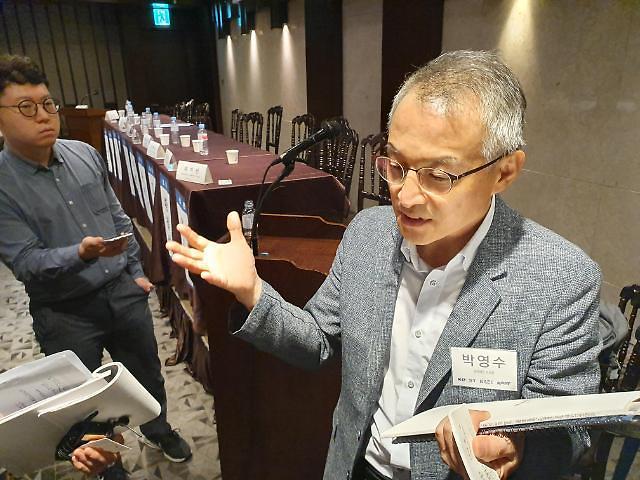 Soulbrain vice president Park Young-soo speaks to reporters about the vision of his company on the sidelines of a business forum in Seoul on August 7. [Aju News reporter Paik Joon-moo]

SEOUL -- At the height of a trade dispute over Japan's export restrictions in mid-July, SK Group chairman Chey Tae-won caused an inadvertent backlash when he voiced vague skepticism over the reliability of home-made materials such as hydrogen fluoride, also known as etching gas used for the production of microchips.

Since Japan strengthened regulations on exports of photoresists, fluorine polyimide and etching gas on July 4, South Korea has launched an unavoidable campaign to diversify import lines for crucial materials, which have been heavily dependent on Japanese companies. President Moon Jae-in has urged South Korean firms to step up localization.

Samsung Electronics and SK hynix have been reluctant to use home-made products, citing a gap in quality with Japanese products. Chey also voiced skepticism after attending a business forum on the southern resort island of Jeju on July 18. "Of course, we can make it, but it's a matter of quality," he said, emphasizing the purity and quality of etching gas.

Experts agree it takes a long time for South Korean firms to catch up with the technology level of Japanese firms in the three items. However, SMEs and Startups Minister Park Young-sun remained discontent, saying the situation might have been far different if large and small companies teamed up for joint research and development 20 years ago.

"When I met small and medium-sized companies and asked them, they replied they could produce hydrogen fluoride...but big companies don't buy it," the minister said, calling for cooperation and joint research between big and small companies. "Everything needs time for accumulation. We must analyze and polish the causes of failure repeatedly by trial and error."

It's not intended at all, but South Korean companies like Soulbrain, the producer of chemical deposition materials, have a golden opportunity to grow. For years, Soulbrain has struggled to localize materials which are reliable and competitive enough to replace Japanese products.

"If the second plant is completed as scheduled next month, there will be no major problem in the supply of hydrogen fluoride this year," Soulbrain vice president Park Young-soo told Aju Business Daily on the sidelines of a business forum in Seoul on August 7.

"We cannot completely replace hydrogen fluoride from Japan, but we will make up for the shortfall caused by import regulations," he said. "Since it takes time to verify, it will be difficult during the third quarter, but we will allow it to go in within this year."

Soulbrain promised to inject alternative supplies of hydrogen fluoride from Japan into the production process of Samsung and SK hynix within this year.

Hydrogen fluoride is used to wash away foreign substances in the process of piling up silicon wafers. Japanese firms dominate the global high-purity hydrogen fluoride market. Regardless of Japan's trade restrictions, Park is confident of localization, saying that based on technology accumulated so far, Soulbrain can produce high-purity products a similar level to those of Japanese companies.

"It is definitely a difficult process to meet the high purity required by companies in demand, but we are fully aware of 'bottlenecks' as we have already been working on our own project to make hydrogen fluoride for six years," Park said. 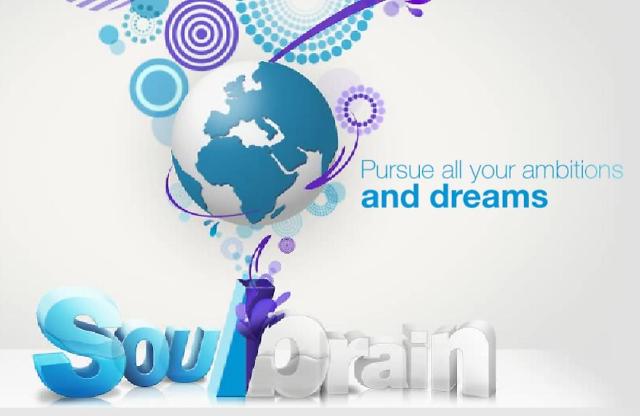 "It is impossible with gradual technological development to become the No. 1 player in the global market. We need to find the point of inflection for the development of technologies," Park said. "If large businesses cooperate with small and medium-sized companies with government support, a first-rate company can come out in the material and component field."

Probably, his hopes can come true quickly as South Korea has already taken a series of measures such as fast customs clearance, a reduction in tariffs, an expansion of production facilities, sufficient financial support and bold investment in nurturing human resources.

Special treatment will be given to 100 strategic items, including those vulnerable to Japan's export restrictions, to secure a stable supply chain within five years in the fields of semiconductors, displays, automobiles, electric electronics, basic chemicals and machinery and metal. Soulbrain would be given top priority.

(This story was contributed by Paik Joon-moo, an Aju Business Daily reporter)