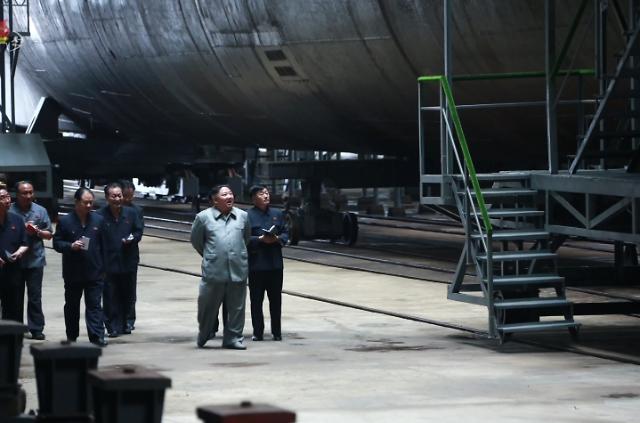 The ministry said in a report to the National Assembly's intelligence committee that the North's new submarine appeared to be a little bigger than the Gorae-class submarine, according to committee head Lee Hye-hoon of the Bareun Future Party, a liberal-conservative opposition party.

Pictures published by the North's official Korean Central News Agency (KCNA) on July 23 showed a blurred part that is believed to be the location where the submarine's SLBM launch tube is mounted, the defense ministry was quoted as saying.

Because its estimated diameter is 7 meters, the new submarine might be 70 to 80 meters long, the ministry said, adding the submarine's appearance showed a lot of crude and poor welding.

Only one Sinpo-class submarine, also called Gorae-class, has been observed in service. It is North Korea's largest submarine which experts say is capable of carrying just one or two ballistic missiles.

At Sinpo, a northeastern port city in central South Hamgyong province, North Korea has a shipyard for SLBMs and submarines. The Sinpo base has a dock capable of producing a large submarine, and there have been unconfirmed reports that 3,000-ton submarines were under construction.

In August 2016, North Korea claimed to have successfully tested an SLBM, saying it is now fully capable of launching a nuclear attack. At that time, experts said the missile called Pukguksong-1 (KN-11) was launched from the Gorae-class submarine and flew about 500 kilometers (310 miles).