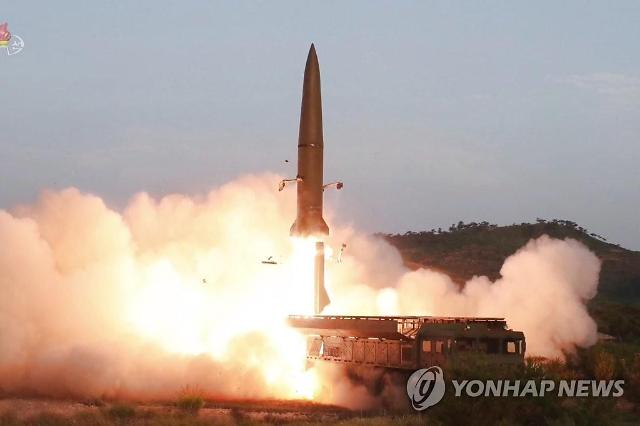 
SEOUL -- North Korea launched what appeared to be a short-range ballistic missile twice following a similar launch six days ago. South Korean military authorities said the projectiles flew about 250 kilometers (155 miles) at an estimated altitude of 30 km before falling into the sea between the Korean peninsula and Japan.

The projectiles were launched from a base near the northeastern port of Wonsan at 5:06 a.m. (2006 GMT) and 21 minutes later, according to the South's Joint Chiefs of Staff (JCS). Two missiles launched from the same place on July 25 traveled around 600 km at an altitude of 50 km.

Defense Minister Jeong Kyeong-doo said that the projectiles launched on Wednesday showed a different trajectory as its peak altitude is lower than that of the missiles launched last week and the flying distance was shorter, requiring accurate analysis by South Korean and U.S. intelligence authorities.

North Korean leader Kim Jong-un inspected the earlier launch and praised "the specific features of the low-altitude gliding and leaping flight orbit of the tactical guided missile, which would be hard to intercept." Military officials in Seoul said that Pyongyang was testing KN-23, a revised version of Russia's ballistic missile, Iskander.

Experts said that Iskander flying on a flattened trajectory can alter its flight path after the boost phase, with defenses unable to precisely predict its flight path. When aided by satellite-navigation, it can make course corrections and reliably land within 20 to 50 meters of its designated target.

"It may be difficult to intercept Iskander-type missiles North Korea launched recently because of low-altitude, pull-up maneuvers, but they are within the range of intercept capability of our defense assets," the minister said at a defense forum on Wednesday.

"We are superior to North Korea in all operational systems," Jeong said, adding that the Agency for Defense Development (ADD), a national agency for research and development in defense technology, has already acquired related technologies. "I hope you don't feel anxious anymore because we have much better precision."

U.S. and South Korean troops will stage a command post exercise code-named "19-2 Dong Maeng (alliance)" in August for about three weeks. Seoul said the exercise is aimed at testing independent wartime operational capabilities. North Korea condemned it as a rehearsal for invasion that could affect denuclearization talks.

In a keynote speech at Wednesday's forum, Jeong urged North Korea to stop provocations and said that South Korean and American troops would go ahead with their planned exercises. "We are also conducting joint exercises and drills between South Korea and the United States," he said, drawing a line between "a certain size of military drills and an inter-Korean peace agreement.