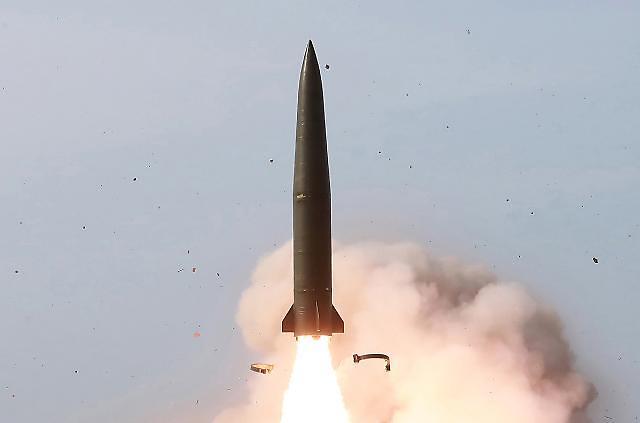 
SEOUL -- North Korea fired two short-range missiles into the sea Thursday, about one month after North Korean leader Kim Jong-un and the United States' President Donald Trump agreed to hold working-level talks when the two leaders met at the truce village of Panmunjom on June 30.

The first short-range missile launched from a base near the northeastern port of Wonsan flew some 430 kilometers (267 miles) and the second one flew 690 kilometers. Both missiles flew at a maximum altitude of about 50 kilometers before falling into the sea, according to the South's Joint Chiefs of Staff (JCS). The range of the first missile was similar to that of the two missiles launched in May, which traveled about 420 kilometers and 270 km, respectively, into the sea.

"North Korea launched two missiles, one at 5:34 a.m. (2034 GMT) and another at 5:57 from Hodo Peninsula near Wonsan," JCS said. Later, JCS said in an afternoon briefing that the second missile, which flew about 690 kilometers, seems to be a new kind of missile.

South Korea and the United States is analyzing the launch of the missiles to find out the details of the projectiles, JCS said, adding the military is on alert and is closely monitoring North Korea for additional launches.

During its morning briefing, South's Ministry of Defense urged Pyongyang to stop such action which does not help ease the military tension on the Korean peninsula and said that the government will work together and communicate closely with the U.S. to strengthen their surveillance on North Korea. The defense ministry also said that the missiles fired on Thursday are estimated to be short-range missiles.

The launch of short-range missiles took place two days after North's official Korean Central News Agency (KCNA) reported of the North Korean leader inspecting a newly built submarine designed to carry out missions in the sea between the Korean peninsula and Japan.

The state news agency reported that the deployment of the new submarine is "near at hand", without disclosing the date of Kim's inspection or location.