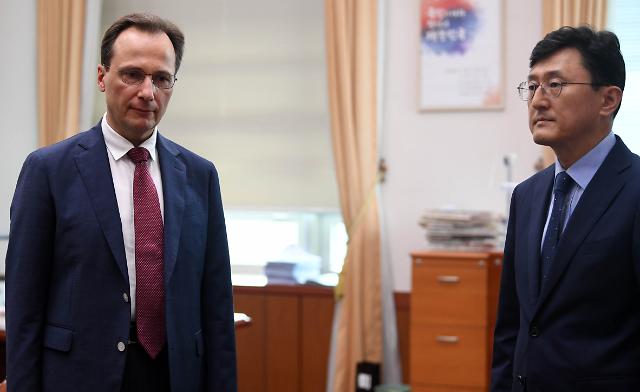 SEOUL -- Russia used diplomatic rhetoric to appease Seoul, saying its warplane may have strayed into South Korean airspace unintentionally due to technical or other problems, but China took a different attitude, putting more emphasis on Sino-Russian joint drills in a sensitive area in Northeast Asia.

A message of regrets was delivered by Maxim Volkov, deputy chief of mission at the Russian Embassy in South Korea, on Wednesday when he met with Yoon Sang-hyun, chairman of the National Assembly's Foreign Affairs and Unification Committee.

The message came a day after a Russian A-50 AWACS aircraft violated South Korean air space twice near Dokdo, a chain of islets located in the middle of waters between the Korean peninsula and Japan, prompting South Korean jet fighters to fire anti-missile flares and hundreds of warning shots.

It was the first time that Russian military planes have invaded South Korea's territorial sky. South Korea regards the unprecedented intrusion as a serious security issue as it followed a rare joint flight by Russian and Chinese warplanes through the Korean Air Defense Identification Zone (KADIZ), an air defense zone claimed by Seoul.

"Volkov said the intrusion was probably 'unintentional' and he described it as 'an act of violating sovereignty,' Yoon said, adding the envoy asked South Korea to provide concrete data such as the time and coordinates for an investigation before Moscow delivers its official position.

"The Russian government knows that there are many concerns in South Korea and is ready to take necessary steps at any time. We value our traditional trust relationship with South Korea and it should not be damaged," the Russian diplomat was quoted as saying.

A similar message has been delivered by a Russian military attache to South Korea's defense ministry, Yoon Do-han, a senior presidential secretary for public communication, told reporters on Wednesday. The attache was quoted as saying a Russian warplane may have entered an unplanned area due to malfunction of devices.

South Korean President Moon Jae-in regards Russia as a crucial partner for his "New Northward Policy" to open a new era of cooperation in Northeast Asia. Russia and South Korea have discussed cooperation in gas-pipeline and other projects.

Beijing took a different attitude, saying Chinese warplanes made a flight on a fixed route in international airspace for an operation, which was not aimed at a third party.

Wu Qian, a spokesperson for China's Ministry of National Defense, said the operation was to develop a strategic partnership between China and Russia, improve their combined operational capability and jointly safeguard global strategic stability. He stressed that countries enjoy the freedom of flight in air defense identification zones for the early identification and location of foreign planes.