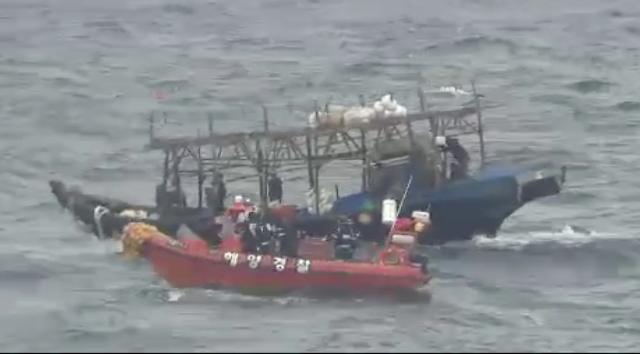 SEOUL -- South Korea's military dismissed an army corps commander and disciplined two regional commanders to hold them accountable for a security loophole exposed by a small boat which made an uninterrupted voyage across the tightly guarded maritime border to put four North Koreans ashore by evading a tight military surveillance network.

The 1.8-ton boat arrived in the eastern port of Samcheok on June 15. Coastguard officers and military surveillance teams did not know until a morning walker reported it. Two fishermen were allowed to stay because they expressed a desire to defect, while the two others were sent back to North Korea.

The boat's undetected voyage to Samkcheok raised concerns about possible deficiencies in the military's surveillance capabilities and a 30-member joint investigation team conducted a special on-site investigation into troops involved in coastal and maritime border operations.

There was no false report or cover-up, but Jeong endorsed the dismissal of the commander of the 8th Army Corps, with a naval fleet admiral and an army division commander being sent to a disciplinary committee.

Stern warnings were issued against the chairman of the Joint Chief of Staff and two top commanders in charge of army and navy operations as well as a regional coastguard chief. An adverse personnel action was taken against a regional maritime police superintendent.

Jeong promised to strengthen the operational capability of monitoring equipment and replace old equipment at an early date after investigators found that troops involved in coastal and maritime surveillance operations failed to detect the small boat or misjudged what was detected in surveillance devices.

The boat left its home port in Kyongsung Country in North Hamgyong Province on June 9 for a group fishing operation with other fishing boats and swerved from its course to sail south. It was not detected during its voyage covering 700 kilometers (434 miles) from the maritime border to Samcheok for 57 hours.

On the dockyard, the North Korean infiltrators had to wait for South Korean military guards or policemen because their action did not cause any attention. A villager finally reported them to police only after a fisherman identified himself and asked to borrow a mobile phone to call his aunt who had defected earlier to South Korea.

Critics said it was reminiscent of a prominent infiltration in September 1996 when a North Korean espionage submarine with 25 North Korean infiltrators ran aground in a coastal town 32 kilometers (19.8 miles) north of Samcheok.

The 1996 infiltration triggered a massive manhunt that left four civilians and 12 South Korean soldiers dead. One infiltrator was captured, 11 were killed by other members, and 13 were shot dead by South Korean troops. Since then, anti-infiltration equipment such as radars and thermal observation devices for infiltration-route analysis have been installed along the east coast.

The two Koreas are still technically at war with no peace treaty signed at the end of the 1950-53 conflict.