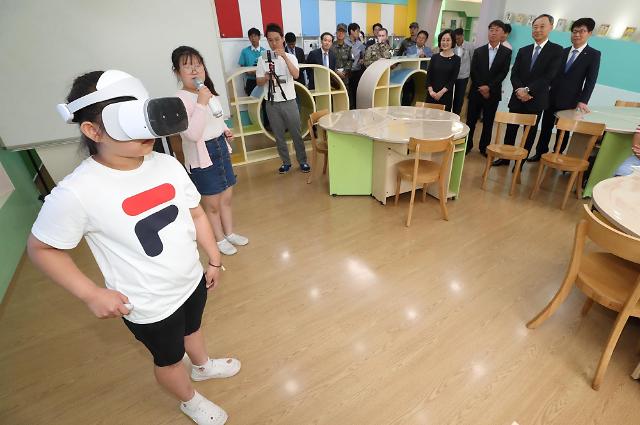 SEOUL -- A showcase village, which is under constant watch by North Korean troops guarding the world last Cold War frontier, was transformed into a 5G town installed with virtual reality devices with farm sprinklers and air conditions being remotely controlled through smartphones.

KT, a telecom involved in the establishment of a 5G mobile telecom network across South Korea, showed off how it changed Daeseong-dong, a military-controlled showcase town in the demilitarized zone (DMZ), which is a four-kilometer-wide strip of land that has divided the Korean peninsula since an armistice accord ended the three-year Korean conflict in 1953.

"The world is very interested in the demilitarized zone, and we will help the 5G village become a hub for people around the world to know the need for unification of the Korean peninsula and the excellence of South Korea's 5G," KT chairman Hwang Chang-gyu said in a ceremony on Thursday.

Students at a small elementary school in the village will be able to enjoy coding education and activities using realistic media with 5G and ICT technologies. A mixed reality (MR) screen was installed in the school auditorium, playing 25 kinds of sports.

KT said that all 46 homes are connected through a 5G IoT integrated control room on the first floor of the village center. In the event of a disaster, the village chief can send text messages and broadcast them to villagers through a TTS function that could change text messages into voice.

With his 5G smartphone, the village chief can remotely control electricity facilities and air conditioners at the town center and the school.

Only those who used to live in Daeseong-dong, formerly known as Tae Sung Freedom Village, before the 1950-53 Korean War or their descendants are allowed to live. It is the only civilian habitation in the southern portion of DMZ and North Korea runs its won showcase village, Kijong-dong. The villages have been known for rival national flags which can be seen on gigantic flagpoles.

Villagers have some unique benefits and restrictions. They are exempt from national defense duties and taxation and live on allocated large plots of land, but there are a curfew and head-counting at night.

Residents are required to receive military escorts when cultivating rice paddies. Now with smartphones, they can activate farm sprinklers and check soil conditions to supply water and nutrients. A system was established to remotely control a joint water supply plant that draws water from a nearby reservoir. 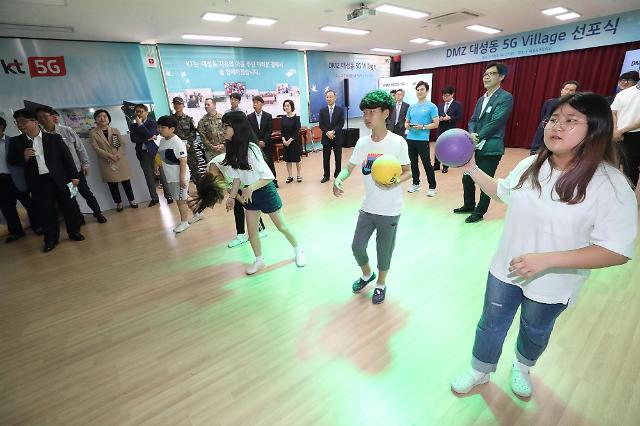 The second floor of the village center is equipped with VR devices that allow people to enjoy live sports and movies in real time. An augmented reality observatory was set up on the third floor. High-definition CCTV allows visitors to experience real-time images of the North Korean town with AR technology.

To remove the risk of war, the two Koreas stopped all hostile activities including artillery drills and field maneuvers on November 1 last year by setting up maritime, air and ground buffer zones in front-line areas.

South Korea has barred civilian access to the DMZ, which has been heavily fortified with minefields, concrete walls and electric fences. Armed clashes and shooting have raised cross-border tensions sporadically between South and North Korean troops manning entrenched concrete guard posts inside the zone.