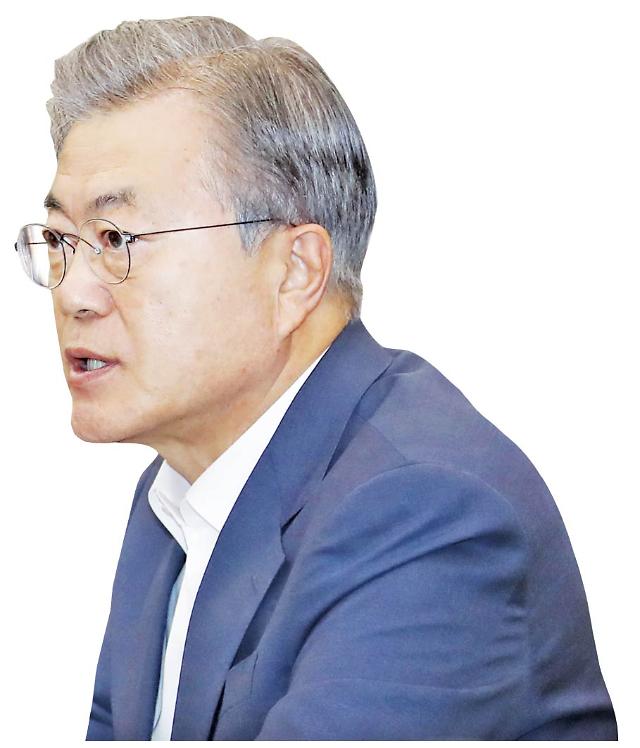 
SEOUL -- President Moon Jae-in said Wednesday that North Korea and the United States are in "behind-the-scenes talks" on another bilateral summit with the peace process on the Korean Peninsula making steady progress.

"Both sides have been engaged in dialogue in regard to a third summit," he said in a written interview with Yonhap News Agency and six other global news agencies. What's noteworthy is, he added, that "The behind-the-scenes talks have been preceded by the mutual understanding of each other's position" from the second summit between U.S. President Donald Trump and the North's leader Kim Jong-un.

Inter-Korean dialogue is also under way via "diverse channels," he confirmed as well. Moon stressed that conditions are ripe for the resumption of formal denuclearization talks.

"There has already been considerable headway made in the peace process on the Korean Peninsula, and it is still making steady progress," he said. "The resumption of negotiations between North Korea and the United States will take it to the next level. I believe everything has now fallen into place for that to happen."

His upbeat outlook came as he gears up for a round of brisk bilateral and multilateral summit diplomacy later this week. He's attending the two-day Group of 20 summit in Osaka, Japan, which will be followed by a weekend summit with Trump in Seoul.

Moon refuted an assessment that the Hanoi summit was a failure and the peace drive has since been in a stalemate. "I don't see it as a failure even though an agreement could not be reached," he said, adding that what was discussed at the summit will become the basis for the next phase of negotiations.

Kim and Trump have continuously shown their willingness for dialogue, as proven by the exchange of personal letters in the past few weeks, he said. Regarding the specific denuclearization steps Pyongyang should take for getting U.N. sanctions on it eased, Moon referred to the complete dismantlement of the Yongbyon nuclear complex, an issue raised in the Hanoi summit held in late February.

"If all of the nuclear facilities in the complex, including the plutonium reprocessing facilities and the uranium enrichment facilities, are completely demolished and verified, it would be possible to say that the denuclearization of North Korea has entered an irreversible stage," he said.

In the case of such substantive progress, inter-Korean economic cooperation, including a move to restart the operation of the Kaesong Industrial Complex, is expected to gain momentum, he added.

In the Vietnamese capital, Trump called on the North to do more than dismantling the Yongbyon facilities for sanctions relief, which Kim refused to accept. Moon reiterated that he's ready to meet with Kim again irrespective of time, venue and formalities.

After having "several talks" with Kim, Moon regards him as "quite a flexible yet resolute person." He would not question Kim's "unequivocal resolve" to "move from the past to the future by opting for economic development instead of a nuclear arsenal." Last week, Kim reaffirmed the commitment in talks with Chinese President Xi Jinping in Pyongyang.

"Besides, he has never linked denuclearization with the ROK-U.S. alliance or a pullout of the United States Forces Korea," Moon said of a lingering debate in the South about whether a withdrawal of U.S. troops is the North's ultimate goal for seeking a lasting peace regime on the peninsula. "I believe in Chairman Kim's determination for denuclearization."