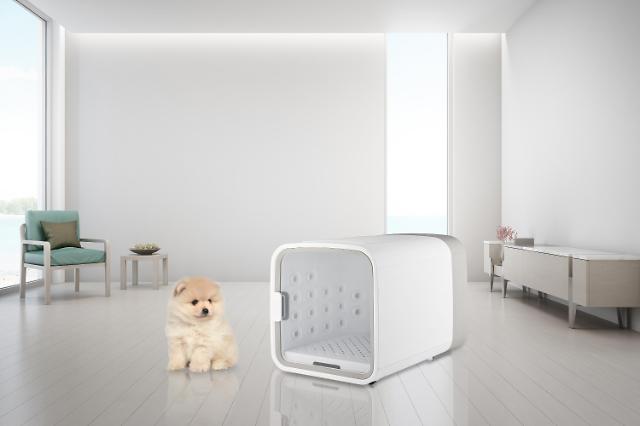 Cuckoo said in a statement on Wednesday that it launched "Nello", a new pet appliances brand, and released "Pet Air Shower & Dry Room", a hair dryer which automatically dries small and medium-sized dogs.

Washing and drying a dog is tiresome for their human companions as canines easily get frightened by the noise of an ordinary hair dryer. Many dog owners give up drying their dogs when they get frantic, causing health problems such as skin troubles.

"We have created this item to maximize the happiness of pets," a Cuckoo official said, adding that the new dry room targets dog owners of all ages.

Cuckoo said that its gadget operates silently and causes a sound level of about 40 decibels like in a public library. The dry room will dry parts where their masters could easily miss through a 30-minute course while the dog relaxes inside.

Thanks to a steady increase in the number of single-person households and DINK (double-income, no kids) married couples, South Korea's pet product market is blooming. According to the state-funded Korea Rural Economic Institute, the country's pet market in 2018 was estimated at 3 trillion won ($2.5 billion), compared to 1.9 trillion won in 2015.