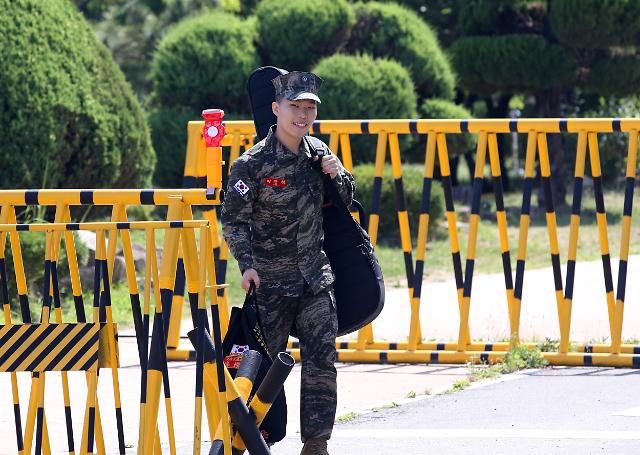 "Honestly, I'm going crazy because I want to release it as soon as possible," the 22-year-old said Wednesday outside a Marine Corps base in Pohang some 278 kilometers (172 miles) southeast of Seoul. The first thing he wants to do now is a trip with his father, he said, adding he would work hard on his new album after he returned from a trip.

Lee also expressed anticipation toward his younger sister, Soohyun, who is a member of Akdong Musician. "Soohyun became an adult while I was in the military. I think we will naturally come up with a mature and solid album," Lee said.

He joined a Marine Corps boot camp in September 2017 to start his mandatory military service. Soohyun has been active as an entertainer and a YouTube beauty creator.

Akdong Musician made its debut on "K-Pop Star Season 2" in 2012 and joined YG Entertainment to release the first album, "PLAY", in 2014. The brother-sister duo has released hit songs such as "RE-BYE", "LAST GOODBYE", and "DINOSAUR".