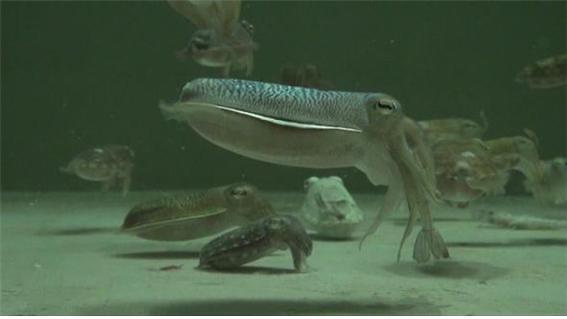 [Courtesy of the National Institute of Fisheries Science]

SEOUL -- An aquafarming method for cuttlefish favored by Koreans as a delicacy for centuries has been developed in South Korea, with a state research institute acquiring knowledge about the types of food the cephalopod consumes and its entire life cycle.

The achievement was made by the National Institute of Fisheries Science (NIFS), a research institute under the Ministry of Oceans and Fisheries. The institute discovered an aquafarming technology to raise cuttlefish in artificial settings, and commercial production is possible in the second half of this year.

South Korean fishermen caught about 60,000 tons of cuttlefish every year in the mid-1980s, but the annual catch has dropped to about 5,000 tons in 2017 due to global warming and overfishing. Researchers could not find the right method of raising cuttlefish because each stage of its life was little known.

The Ministry of Oceans and Fisheries said in a statement on Monday that NIFS researchers have incubated and fertilized eggs taken from wild-born mothers. The first generation of artificially raised cuttlefish laid eggs. The key to success was to find out what young hatchlings ate. Researchers have successfully nurtured cuttlefish hatchlings into adults by feeding fodders tailor-made to each life stage.

The research institute said the first generation of aquacultured cuttlefish laid eggs in January that hatched a month later. "It is very nice to have developed the whole periodic culture technique of cephalopods loved by Koreans," NIFS head Seo Jang-woo was quoted as saying.

The ocean ministry said that aquafarmers could collect an average annual profit of about 130 million won ($109,893) per hectare if they sell each cuttlefish for about 8,000 to 10,000 won per kilogram (2.2 pounds). There are large octopus farms in the Mediterranean and along the coast of the South American continent, while cuttlefish is widely farmed along the west coast of India.