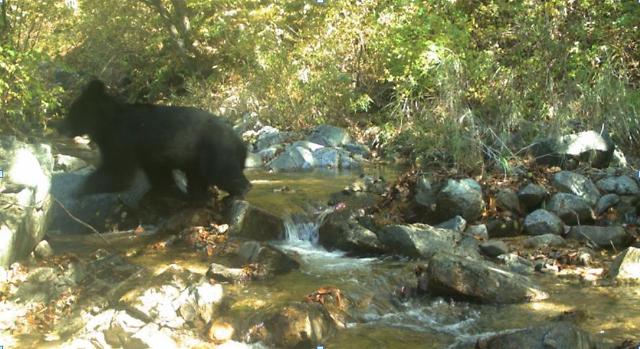 [Courtesy of the environment ministry]


SEOUL -- An Asiatic black bear, which is protected as a first-grade endangered animal, was found to be inhabiting in a no man's zone that forms the world's last Cold War frontier guarded by South and North Korean troops.

A picture taken in October last year by a surveillance device installed by the state-run National Institute of Ecology (NIE) to monitor wildlife in the eastern section of the Demilitarized Zone (DMZ), showed a baby moving across the valley somewhere.

It's the first time an Asiatic black bear has been photographed inside the zone, according to a joint statement issued by the NIE and the Ministry of Environment. The DMZ is a four-kilometer-wide strip of land that has divided the peninsula since an armistice accord ended the three-year conflict in 1953. It has been heavily fortified with minefields, concrete walls and electric fences.

Considering the shape of tight fences, it is highly unlikely that the bear has moved from the outside, the institute said, adding the bear is believed to be a wild animal that has lived for a long time in the DMZ. The picture prompted the institute to speculate that at least three Asiatic black bears are living in the zone.

The baby bear, weighing about 25 to 35 kilograms, looks about eight to nine months old, the institute said. The picture proved that the DMZ is an ecological treasury of rare plants and animals. The environment ministry said 61 Asiatic black bears live in South Korea, helped by a state project to preserve the endangered animal.