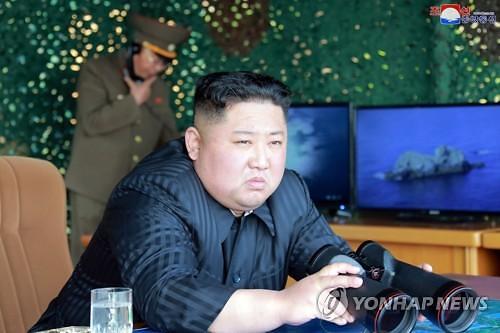 
SEOUL -- South Korea's spy agency played down the severity of North Korea's sudden missile launch, saying it appeared to be controlled action intertwingled with diplomatic pressure as denuclearization negotiations were in a stalemate following a failed summit between U.S. and North Korean leaders in Vietnam in February.

Pyongyang has not test-fired a ballistic missile since November 2017 to expedite a grand deal with Washington. Trump has advocated a "big deal" under which North Korea would dismantle all of its nuclear arsenal and related facilities in exchange for the removal of sanctions.

Showing fatigue at a prolonged deadlock in denuclearization talks, North Korean leader Kim Jong-un has threatened to take a different path unless Washington changes its stance. In a speech at the North's rubber-stamp parliament two weeks ago, he urged Washington to come up with a "fair" and "mutually acceptable" deal by the end of this year.

In a drill on May 4, Kim supervised the "strike drill of defense units," the North's Korean Central News Agency (KCNA) said. "The purpose of the drill was to estimate and inspect the operating ability and the accuracy of striking duty performance of large-caliber long-range multiple rocket launchers and tactical guided weapons by defense units in the frontline area and on the eastern front," it said.

The projectiles launched from the northeastern port city of Wonsan fell all into waters off the east coast after flying up to 200 kilometers (124 miles), South Korean military authorities said.

Intelligence Committee chairman Lee Hye-hoon quoted the NIS official as saying, "The launch does not appear to be as provocative as in the past,." "Although there is a nature of pressure to the outside world, it is probably intended not to break the deadlock in denuclearization negotiations. North Korea appears to be controlling the level."

In a tweet message, Donald Trump voiced his confidence that Kim would keep his promise on denuclearization. "Anything in this very interesting world is possible, but I believe that Kim Jong Un fully realizes the great economic potential of North Korea, & will do nothing to interfere or end it," Trump tweeted. "He also knows that I am with him & does not want to break his promise to me. Deal will happen!"