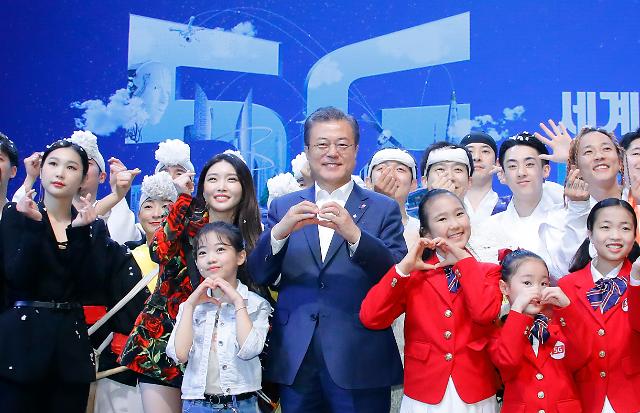 President Moon Jae-in takes a commemorative photograph in a ceremony at a park in Seoul on April 8 to celebrate the world's first launch of 5G mobile services. [Yonhap News Photo]


SEOUL -- In a ceremony to celebrate what was hailed as the world's first launch of next-generation mobile services, South Korean President Moon Jae-in envisaged the goal of achieving $73 billion in exports of 5G-related products from autonomous driving and other industries by 2026, based on an unrivaled 5G ecosystem.

"This is another milestone following the world's first commercialization of high-speed internet," Moon said Monday in his address in Seoul. Last week, selected customers including former Olympic figure skating champion Kim Yuna and two members of EXO, a K-pop band, received 5G smartphones from mobile carriers to herald the start of their 5G mobile services.

South Korea won a time fight while Verizon used Motorola's MotoZ3, a 4G LTE device which is upgradable to 5G with the so-called 5G Moto Mod. With both sides claiming to be "industry-first", controversy is expected to arise over who is "industry-first."

Monday's ceremony was attended by hundreds of government officials and businessmen who watched the so-called KOREAN 5G Tech-Concert that showed 5G-based holograms and augmented reality technologies.

"Our government plans to create the world's best 5G ecosystem by pursuing a '5G strategy' at the national level," Moon said, adding government and private sectors would invest more than 30 trillion won to complete the establishment of a nationwide 5G network by 2022. "The 5G-based ecosystem of new industries will be an opportunity for our nation to create a second venture boom."

"In the era of the Fourth Industrial Revolution, 5G mobile communications, which transmit vast amounts of data very quickly and connect everything in real time, will create new opportunities for our industry and economy," the president said, adding 5G technologies and services will be first available in the areas of health care, education, transportation and disaster management.