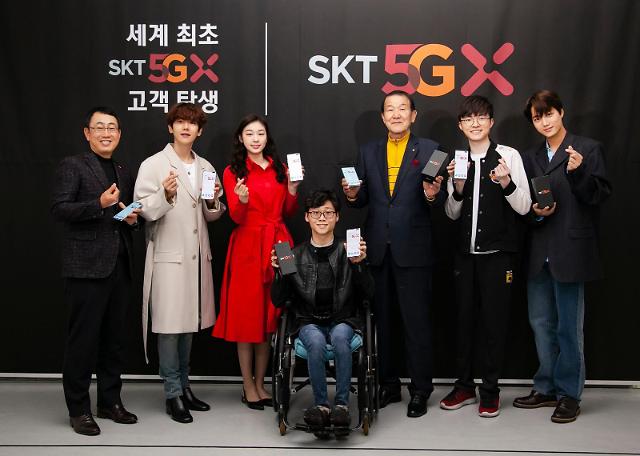 SKT said the ceremony was launched two days ahead of schedule to show the world that South Korea was the first country to roll out 5G mobile services for smartphone users for the first time in the world. The event was to be held on April 5, when mobile carriers distribute 5G phones through authorized dealers and official online malls across the country.

SKT insisted that six customers were able to use 5G phones at any time when they were powered on. "We were always sad because we could not meet many fans very often," Baekhyun and Kai said in a statement published by SKT, voicing hope that they would meet more fans through SKT's 5G virtual reality service.

Controversy over who is the first provider of 5G mobile services in the world may arise, however, as U.S. mobile carrier Verizon flipped the switch on the first parts of its 5G mobile network a week ahead of schedule in an unheralded move.

Verizon launched its first 5G smartphone service on Motorola's MotoZ3 in Chicago and Minneapolis, claiming that its customers could access a commercial 5G network "with the world’s first commercially available 5G-enabled smartphone."

"Today, Verizon officially turned on its 5G Ultra Wideband network in select areas of Minneapolis and Chicago a week ahead of schedule. For the first time ever, customers can access a commercial 5G network with the world’s first commercially available 5G-enabled smartphone," the American company said in a statement.

"Verizon customers will be the first in the world to have the power of 5G in their hands," said Hans Vestberg, Verizon’s chairman and chief executive officer. "This is the latest in our string of 5G firsts. Verizon launched the first commercial broadband 5G service last October, Verizon 5G Home, and now we’re lighting up our 5G Ultra Wideband network in Chicago and Minneapolis, providing the world's first commercial 5G mobile service with a 5G-enabled smartphone."

South Korea claimed to have won a time fight, but its service was launched for a small number of selected customers. Verizon launched a broad service two hours later, but it used Motorola's MotoZ3, a 4G LTE device which is upgradable to 5G with the so-called 5G Moto Mod.

With both sides claiming to be "industry-first", the global market or the GSM Association (GSMA), a trade body that represents the interests of mobile network operators worldwide, would be entrusted with judgment.

"When 5G networks are implemented, response speeds will be drastically shortened, which means you’ll experience real-time responsiveness with most types of content," Albert Hoseong Kang of Samsung's innovative product planning group said in a statement uploaded on the company's news blog on Thursday.

Samsung said its 5G smartphone will help create an environment in which cloud, AR, VR and ultra-high definition video services. "Downloads and uploads speeds will be dramatically reduced, which means more people will be watching and shooting high-definition content," Kang said.

"Delay times will be virtually eliminated during sports broadcasts, and games like first-person shooters and racing games, which could be difficult to enjoy due to mobile devices' technical limitations, will be taken to a whole new level," he said.