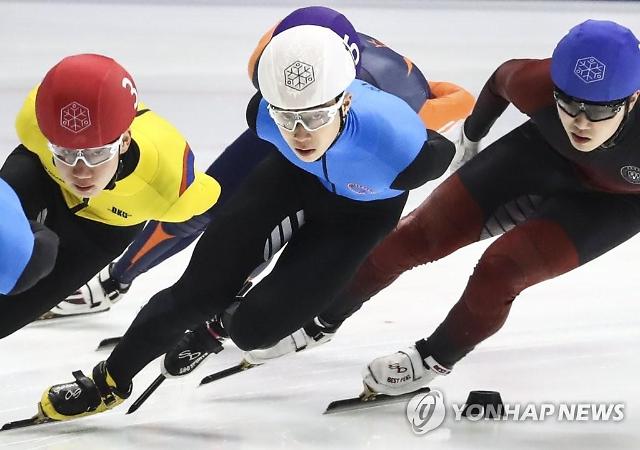 
SEOUL -- Kim Gun-woo, a promising short track speed skater who has produced good records in the men's 1,500m, was suspended for one month for walking into the dormitory of female skaters at a state training camp. He could come back for national team trials in early April.

The 20-year-old was a national team member when he broke into the female quarter at the training center in Jincheon, some 75 kilometers (46 miles) south of Seoul, on February 24 to deliver cold medicine to Kim Ye-jin, a 3000m relay gold medalist in the Winter Olympics in Pyeongchang.

In a disciplinary committee meeting on Friday, the Korea Skating Union (KSU) suspended Kim Gun-woo for one month together with 20 hours of community service. The ban is retroactive to March 3, when he was expelled from the camp.

The penalty was not severe because the union took into consideration Kim Gun-woo's argument that he broke rules in good faith to help his female colleague. Kim Ye-jin, 19, received 10 hours of community service for using her access card to help Kim Gun-woo enter the women's dormitory.

The case followed a #MeToo revelation by Shim Suk-hee, a 21-year-old Olympic gold medalist, that triggered widespread public resentment and led to an intensive state probe into sexual abuses, beatings and human rights violations in sports.
On January 30, an appeals court increased the jail term of Cho Jae-beom, a former national team coach, from 10 months to 18 months for beating four skaters, including Shim who separately accused Cho of having sexually assaulted her on multiple occasions since she was a 17-year-old high school student in 2014.