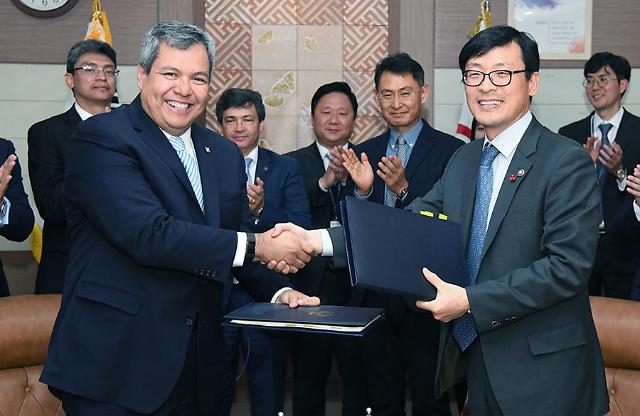 [Courtesy of the Ministry of Economy and Finance]

The accession protocol was signed between Lee Ho-seung, vice economy minister, and Dante Mossi, executive president of the Central American Bank for Economic Integration (CABEI), at the government complex building in central Seoul.

This photo provided by the Ministry of Economy and Finance shows Vice Minister Lee Ho-seung (R) shaking hands with Dante Mossi, executive president of the Central American Bank for Economic Integration, during a signing ceremony at the government complex building in central Seoul on Dec. 28, 2018. (Yonhap)

hide caption
South Korea is set to provide US$112.5 million to the Central American financial institution in the next four years for a 7.6 percent stake, the second-largest held by a non-regional member after the 11.62 percent controlled by Taiwan, according to the Ministry of Economy and Finance.

South Korea is set to become the 15th member state of the multilateral lender once the deal is ratified by the National Assembly.

Founded in 1960, CABEI is aimed at extending loans to private and government-led development projects in the Central America region. It has 14 members, including Guatemala, Honduras and Costa Rica.

South Korea has clinched a series of free trade agreements with major trading partners, including the United States and China, as well as Chile, Peru and Colombia, in recent years as part of its efforts to boost growth in the country's export-driven economy.