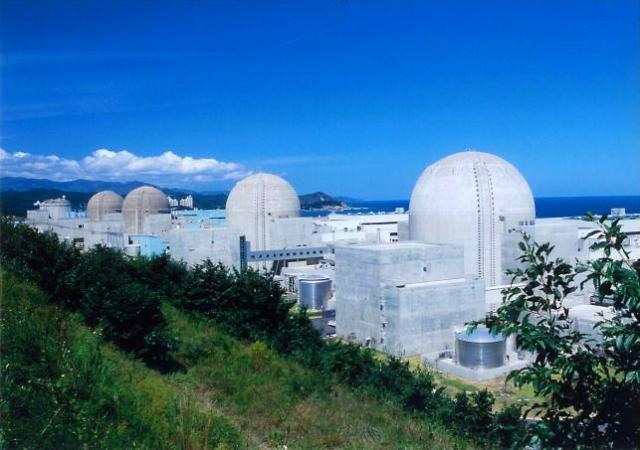 [Courtesy of the Hanul Nuclear Power Site in the eastern town of Uljin.]


SEOUL -- South Korea's science ministry revealed a seven-year program to inject some 670 billion won ($596 million) in state money into the development of independent technologies related to the safe operation of nuclear power plants, the dismantlement of decommissioned reactors and waste management.
The program calls for the acquisition of technologies for the prevention of radiation leakages as well as the safe transportation, storage and disposal of spent fuel, Vice Minister Lee Jin-gyu told reporters Monday, admitting South Korea's nuclear safety technology lags behind that of advanced countries.

President Moon Jae-in has unveiled a new energy roadmap to replace fossil-fueled power plants with clean and renewable energy sources. The life cycle of existing reactors will not be extended to decrease the number of nuclear power plants from 24 to 18 in 2030 and nine in 2050.

Nuclear waste and spent fuel have been stringent issues because Washington is reluctant to revise a 2015 accord that has effectively restricted the development of reprocessing facilities to acquire enriched uranium as fuel. Data from by the Ministry of Trade, Industry and Energy showed that South Korea needs some 100.6 trillion won to seal reactors and manage spent fuel and radioactive waste.

In a report in November, the state-run Korea Atomic Energy Research Institute (KAERI) said it would cooperate with TENEX and other Russian bodies to secure technology related to the decommissioning of nuclear and radiation hazardous facilities. TENEX is a key Russian organization in nuclear uranium conversion, enrichment services and spent fuel and radioactive waste management.

The 2015 deal only allows Seoul to conduct research into "pyroprocessing," a new unverified technology considered largely proliferation-resistant since the product is thermally and radioactively far too hot to use for a weapon. Wary of potential proliferation, Washington has insisted that wider concessions on reprocessing could complicate efforts to denuclearize the Korean peninsula.

A sodium-cooled fast reactor uses liquid metallic sodium as the sole coolant that carries heat from the core, but sodium's chemical reactivity requires special precautions to prevent and suppress fires. If sodium comes into contact with water it explodes, and it burns when in contact with air.