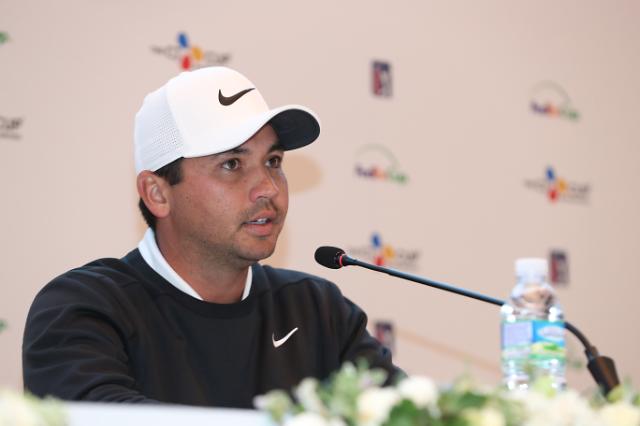 Day is back at the PGA Tour's CJ Cup @ Nine Bridges for the second straight year. He finished tied for 11th at the Club at Nine Bridges on the southern island of Jeju, and went on to win twice in his bounce-back season after a winless 2016-2017 campaign.

"If I can try to improve on that (11th-place finish) and get myself in contention and possibly win, it sets up the whole year," Day said at a pre-tournament press conference Wednesday. "That's why I've come back to play. I enjoy the golf course and the fans. If i can get myself a 'W' here, that'd be crucial for my year, starting forward."

Day, who played in the pro-am earlier in the day, said the course conditions improved from the previous year, since the area had better weather leading into the tournament than in 2017. As long as the wind doesn't blow so hard, Day feels the par-72, 7,184-yard course will be there for the taking.

Justin Thomas won last year's tournament in a playoff over Marc Leishman after the two players were tied at nine-under 279 through 72 holes. Thomas was at nine-under after the first round of 63, and battled through the wind over the next three rounds, carding 74, 70 and 72.

"If the conditions were very benign, it would have been 20-under, if not better," Day said. "And if the weather conditions are easier on us, somewhere between 10 and 15-under will most likely win it this year. If the wind is down and makes things simpler for us, we can be a lot more aggressive."

A quick start to the season should put Day on a path back to No. 1. He spent more weeks as No. 1 than anyone else in 2016 but has since fallen to No. 12. Between his mother's health issues and the upcoming birth of his third child, Day acknowledged, "Priorities have switched a little bit for me."

And returning to the top of the rankings will take a combination of drive and patience. "(I need to understand) trying to climb back to the top of the mountain is not a matter of forcing it or trying to get there quickly. It's about the process of getting better and trying to improve each and every year," he said. "I am looking forward to improving this year and trying to regain the No. 1 spot. I know there are a lot of good players in front of me that are playing very, very well. But I've been there before and I know what it takes to get there."
(Yonhap)