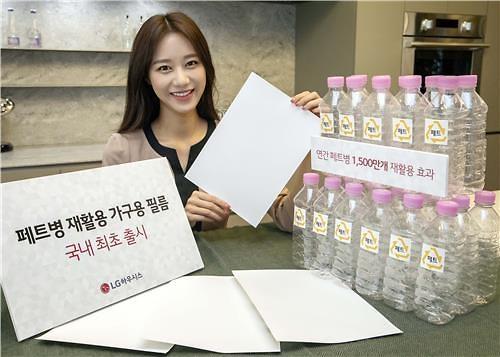 A self-adhesive furniture wrap or film is made of vinyl to decorate the surface of furniture. There have been technical problems in using recycled polyethylene terephthalate (PET) bottles because impurities included in recycled source materials cause inconsistent color and the loss of adhesive strength.

LG Hausys said in a statement on Monday that it has solved problems to use about 70 PET bottles for the production of a film which can cover a kitchen sink for a middle-sized household.

"We are in fierce competition with a Japanese rival in the $400 billion global furniture film market to grab the No. 1 spot," an LG Hausys official was quoted as saying. The company vowed to sell its products to American and European furniture makers which are expanding the use of eco-friendly products.

LG Hausys estimates that considering its production capacity, it can recycle some 15 million PET bottles annually.