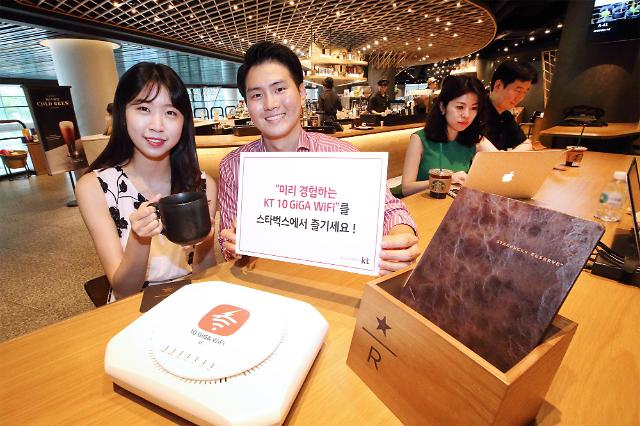 
SEOUL -- A next-generation Giga Wifi service will be put into commercial operation at Starbucks outlets in South Korea next month in a pilot project to ease a bottleneck in Wi-Fi connection.

South Korea's top telecom company, KT, said Monday that its 10 Giga WiFi, built on a new technology called 802.11ax, would be offered in August at three local outlets of Starbucks, an American coffeehouse chain. KT plans to expand its service gradually at other places.

10 Giga WiFi is a 10G internet-based service, which has a maximum speed of about 4.8Gbps, compared to the current maximum speed of 1.7Gbps. Gbps (gigabits per second) is a data transfer speed measurement for high-speed networks.

KT described its new service as an important turning point to break through technical limitations in Wi-Fi performance and said that with the application of 10G internet infrastructure, it has improved the problem of poor quality when many subscribers were connected.