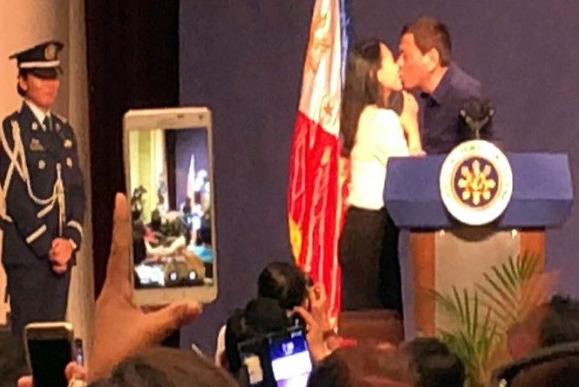 
SEOUL -- As much as he has gained attention for his strong and chauvinistic comments, Philippine leader Rodrigo Duterte, dubbed "The Punisher" for his brutal anti-drug drive, is known for his contentious quips, expletive quotes and controversial behaviors.

Again during his first state visit to South Korea this week, he grabbed the spotlight not with any political remarks but for his kiss at a hotel convention center Sunday to meet with Filipino residents.

He surprised his audience when two women were invited to receive a book titled "Altar of Secrets" by Aries C. Rufo. Their identities were not disclosed but there have been news reports that one woman is Bea Kim, a mother of two children, who lives with his Korean husband.

Video footages showed Duterte giving a hug to one woman and gesturing for a kiss on the lips for a younger woman. Nervous laughter came from the young woman as she bounced up and down, with her hands covering her blushing face. Wih her arms flailing in the air, she accedes to Duterte's request and edges forward nervously.

After a failed first attempt due to embarrassment, Duterte's hands gripped the woman's arms and they both advanced slowly towards each other again as she squinted her eyes in the hope of getting over with the awkward situation.

As their lips drew closer, the echoing cheers or screams of the audience grew louder. They screamed and waved smartphones in the air, hoping to record this significant moment, and when it is finally done, laughter can be heard.

The scene caused an uproar on social media with users debating over whether Duterte's act should be regarded as an entertainment or carried a deeper meaning as he has been well known for crude and sexists remarks in his career.

During his campaign in 2016, Duterte was under fire for a joke he made about the rape and murder of a 36-year-old Australian woman and four other missionaries. His dark and cruel joke sparked anger in Australia and his political opponent, Senator Grace Poe, condemned Duterte's "distasteful and unacceptable" disrespect for women.

In February this year, the Philippine leader was criticized for his remarks that his soldiers should not kill female rebels but shoot them in their genitals.

Senator Risa Hontiveros of the opposition Akbayan political party in the Philippines, urged the public not to pass judgment on the woman who was kissed, saying it was consensual. But she called for "vigilance and discernment."

Other comments on twitter did not see Duterte's act in Seoul as a misconduct. A twitter user nicknamed "c_bibi" said: "There was nothing wrong in #Duterte kissing a Filipina on the lips? So…those criticizing this act have dirty minds? And yours are clean? IDIOTS!"

A Washington Post correspondent tweeted, "This is what macho populism looks like: Duterte brings a woman on stage. Asks if he can kiss her. She shakes her head 'no'. He keeps pushing. Kisses her. And the crowd cheers."

Despite negative comments and opinions, supporters argue Duterte deserves respect for instilling discipline and ridding his nation of corruption and drugs.

This story was contributed by Jazin Wee, an editorial assistant.