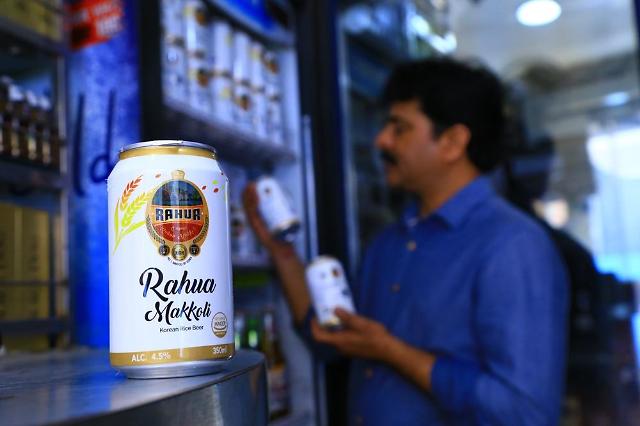 
SEOUL -- Demand for makgeolli, South Korea's traditional unfiltered rice wine, has been rising in India, helped by the popularity of Korean culinary culture and music.

Makgeolli has about 6–8 percent alcohol by volume and some brands are flavored with corn, chestnuts, apples or other produce. It is commonly available in plastic bottles, but new makgeolli products, carbonated or flavored with fruits, has been produced to attract young consumers.

Lotte Chilsung Beverage, an arm of South Korean retail giant Lotte group, said Thursday it is exporting Rahua, which contains 4.5 percent alcohol in a 350-milliliter can, to northern India.

Rahua is available at stores in Delhi, Lotte Chilsung said, adding it would expand its distribution channel to central and southern parts of India. Lotte Chilsung is in charge of exporting and marketing Rahua produced by Seoul Jangsoo, a traditional wine producer.

Makgeolli exports have been on a steady decline to stand at $12.87 million in 2016, according to data from the Korea Agro-Fisheries & Food Trade Corp. However, Lotte Chilsung said Rahua would sell in India's growing liquor market as fermented rice wine is also popular among Indian wine lovers.