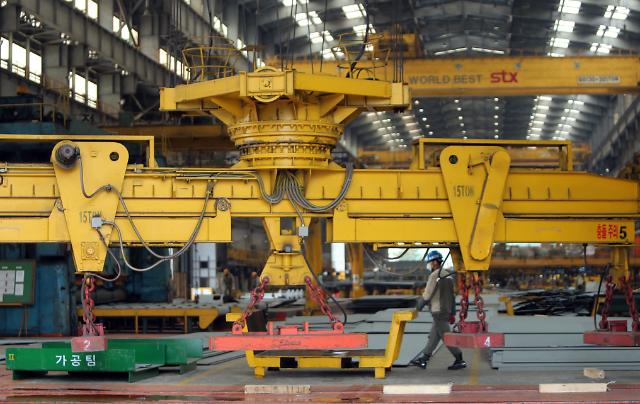 
SEOUL -- Sungdong Shipbuilding and Marine Engineering, a midsized shipyard, will be put under court receivership because it has no chance of coming back due to snowballing debts, a key creditor bank said Thursday.

As part of South Korea's industry-wide restructuring, Sungdong Shipbuilding in the southern port of Tongyeong has been under a creditor-led rehabilitation program, but it is now expected to go bankrupt in the second quarter of this year.

"We believe court receivership is inevitable because its rehabilitation is impossible," Korea Eximbank chief Eun Sung-soo told reporters, adding his bank would not extend any fresh loans. The troubled shipyard is not able to avoid bankruptcy with no work to do, he said.

Meanwhile, STX Shipbuilding will be kept afloat with a continued injection of liquidity from creditors led by the state-run Korea Development Bank (KDB) because South Korea needs a shipyard capable of building small and mid-sized tankers.

KDB head Lee Dong-gull warned STX should file for court receivership unless it presents a sweeping self-rescue plan endorsed by workers. He said that if restructuring is successful, the shipyard should change its structure to focus on high value-added vessels.​
STX, which used to be the country's fourth-largest shipbuilder, filed for court receivership in May 2016 and resumed normal operations in August last year.

Through aggressive mergers and acquisitions abroad, the STX group nurtured its shipbuilding unit as a major shipbuilder but it began falling apart in 2008 when a financial crisis battered the global shipbuilding industry. The crisis forced STX to grab orders at lower prices that have undermined its bottom line.