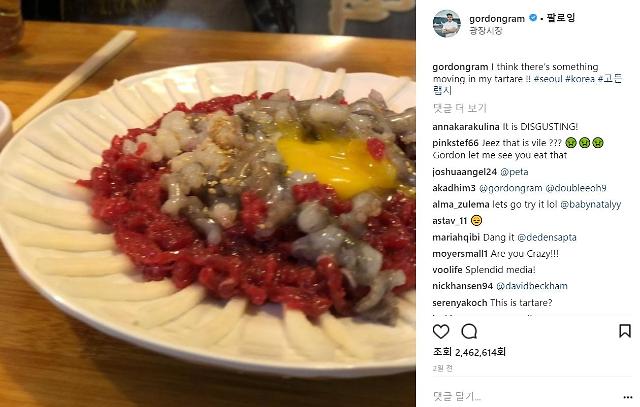 Gordon Ramsay, a famous British star chef who visited South Korea this week to attend a local TV program, has expressed amazement at a traditional Korean dish using an uncooked live octopus as an ingredient.

"I think there’s something moving in my tartare !!" Ramsay said after uploaded a video showing "Yukhoe & Sannakji", a traditional Korean beef tartare served with chopped live octopus, on his Instagram on Monday.

He was in Seoul to film an episode of the popular TV show "Please Take Care of My Refrigerator". He tried the scary-looking dish at an open market in central Seoul. There he was greeted by dozens of people trying to get a glimpse of Ramsay. 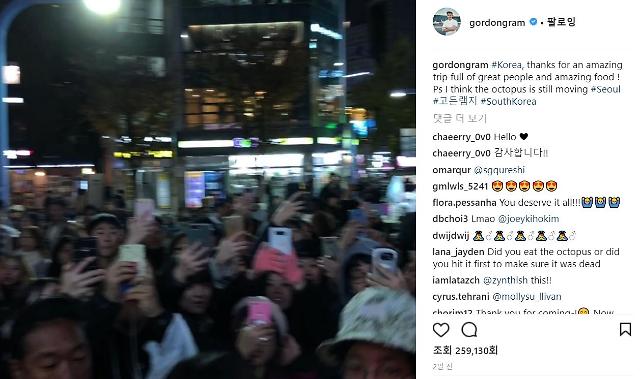 
In another Instagram post, Ramsay uploaded an additional video showing South Koreans flocking around the chef and wrote: "Korea, thanks for an amazing trip full of great people and amazing food! Ps I think the octopus is still moving."

South Koreans chewing on wriggling raw penis fish (spoon warm) or octopus were often seen as weird and disgusting on YouTube. Ramsay's clip sparked comments mixed with curiosity and fear. A visitor called jakethekitkat69 wrote: "That looks so creepy but it prob tastes good I'd give it a try." Another visitor, avichaita, asked: "What the hell are these?"