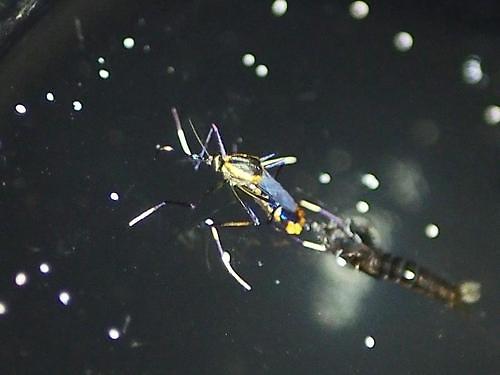 
South Korean scientists have discovered an effective way to reduce the population of mosquitos carrying bad things like the Zika virus by using "mosquito eaters" which are indigenous to the Korean Peninsula. It's not clear if there is a similar research in other countries.

It was the result of joint research by scientists from the state-funded Korea Environmental Industry Technology Institute (KEITI) and Korea University who have farmed Gwang-leung-wang-mo-gi (Toxorhynchites christophi), an indigenous breed known as "elephant" mosquitos, in a light-controlled nurturing facility.

"We have developed a new mosquito-eradication method using Gwang-leung-wang-mo-gi," Kown Jae-sub, a KEITI team manager, said. "Because of their characteristics, the mosquito eaters can be effectively used to prevent infectious diseases including Zika."

Through field tests, the scientists saw a dramatic effect in controlling the mosquito population. "We found an average of 105 mosquitos in outdoor traps without the mosquito eater larvae but we only found two inside a trap with Toxorhynchites," Kwon said.

Researchers said the mosquito eater consumed about 400 blood-sucking mosquito larvae for 16 days before it metamorphosed into a honey-sucking adult. A fully-grown up female elephant mosquito lays about 40 eggs before it dies, they said, adding about 600 offspring were produced over two generations from a single adult female.

The larvae of elephant mosquitos feed on other mosquito larvae and share habitats with Asian tiger mosquitos (Aedes albopictus) carrying dengue fever and Zika virus in the woodland environment.

"It is getting harder to control the mosquito population with pesticides because they are becoming more resistant to the chemicals," Bae Yeon-jae, a professor at Korea University's College of Life Sciences & Biotechnology. "But it would be easier if we use natural predators which share the habitat of mosquitos."

According to the World Health Organization's data, more than 1.5 million people in Central and South American countries were infected with Zika resulting in over 3,500 cases of microcephaly between October 2015 and January 2016. Microcephaly is a birth defect that causes babies to be born with abnormally small heads and with brain damage.

In a desperate move to prevent the spread of Zika, many health organizations are trying various methods to control mosquitos. The US Food and Drug Administration (FDA) has approved a trial of genetically modified mosquitoes in Florida in August last year. The FDA hopes the second generation of gene-altered mosquitos dies before they can mate. In other countries, chemical pesticides are commonly used in urban areas.