There is a list of must-check-out touristic marks in Austria and Schloss Schonbrunn is one of the top sites that is highly recommended by travel experts. 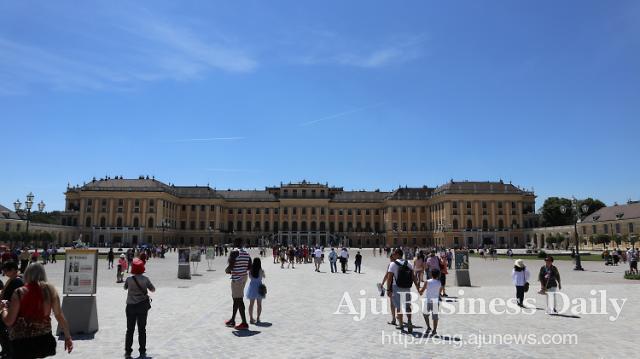 
Schloss Schonbrunn or Schonbrunn Palace was registered as a UNESCO World Heritage Site since 1996. It was favored as a summer residence and a hunting ground for Austrian Habsburg royal families. The estate has been part of the family for centuries since 1569 but was replaced to the current Baroque style palace from a chateau in the late 17th century commissioned by Emperor Leopold I. It was extensively renovated and redecorated in Rococo style by Empress Maria Theresa.

Habsburg dynasty ruled for six centuries and had many famous rulers and royals like Empress Maria Theresa, who was the only female ruler of the Habsburg family, and Marie Antoinette. The Habsburgs ancestry traces back to Aargau in Switzerland.

The grand palatial estate has many different sections to tour: the main building, Privy and Orangery Gardens, Maze, and Gloriette.

The most famous residents of the Schloss Schonbrunn were Empress Maria Theresa, Emperor Franz Joseph I and Empress Elizabeth, who is commonly called as "Empress Sisi" in Austria.

In the main building tour, visitors get to see the rooms that Royals used. Empress Maria Theresa's apartments are among the most lavish rooms of the palace.

Emperor Franz Joseph I's rooms are rather simple and modest compared to other rooms that portray his character as a strict Catholic and an emperor who referred to himself as the first public servant of his state. He was known for beginning his day at four and his work at five in the morning. The longest-reigning ruler of Austria famously said, "One must work until one drop from exhaustion." He ruled for 68 years until his death in 1916 at the age of 86.

Emperor Franz Joseph I's wife Empress Sisi was one of the most beautiful women of her time and was worshiped and loved by her husband. She was known for her independent spirit, extravagant nature, and beauty that made her a mythical figure in Austria. She kept a strict diet, skipping family dinners often, and played sports to keep her slender figure.

In the palace, French cuisine was served for state dinners and Austrian cuisine like Schnitzel and Beef Goulash were served for three to six-course family dinners.

Great Gallery is a must see on the tour with its extravagant Rococo decor. One Chandelier of the room needed 70 candles. The painting of the ceiling was commissioned Gregorio Guglielmi, an Italian painter.

Tour Tips:
1. You cannot take photos during the main building tour.
2. No backpacks are allowed for the main building tour, and you have to leave your backpack in the cloakroom for free if you purchased a tour ticket.
3. Try to get the combination tickets for better deals like "Classic Pass Schonbrunn" to check out all of the estate or "Sisi Ticket", which give you access not only the Schonbrunn Palace but also to three different exhibitions in The Vienna Hofburg and Imperial Furniture Collection.
4. Drink plenty of water in between of tours to prevent heatstroke if you are planning to purchase "Classic Pass Schonbrunn" and spend a full day at the estate.
5. There is a water fountain near the main gate, fill up your water bottle there before entering the estate.