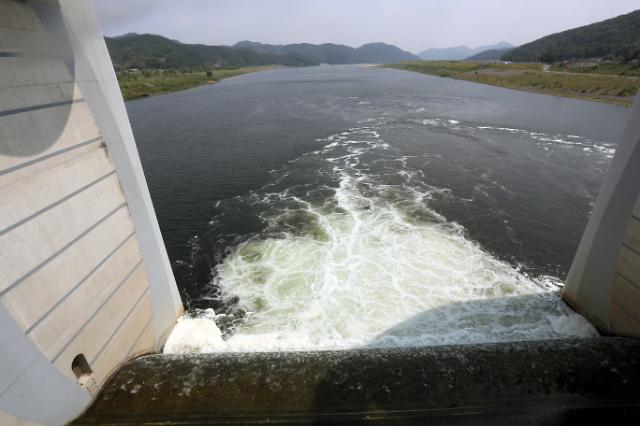 
South Korea opened floodgates at six dams built across four major rivers to remove toxic green tides that have spread rapidly this spring due to a prolonged drought amid growing concerns about a shortage of water for irrigation.

Water was released simultaneously from six dammed pools on the Han, Nakdong, Geum and Yeongsan rivers, under an order from President Moon jae-in to clean waterways and reduce the rampant spread of algae.

Environment activists called for drastic steps, saying the government's decision is not enough to improve water quality. Moon's office promised to open all dammed pools to the lowest limit by the end of 2018 saying the opening of flood gates at the other 10 dams depends on the outcome of environmental studies.

The opening of floodgates would lower water levels by up to 1.25 meters, agriculture and environment ministry officials said in a joint news conference, adding irrigation for farmers would not be affected.

A prolonged drought amid unseasonably hot weather has caused a lack of water for rice crops. The monsoon season normally begins in late June, but weather authorities predict the amount of rainfall will not be high.

The Korea Meteorological Administration said accumulated precipitation as of May 31 was just 161.1mm (6.34 inches), about 55 percent of the 30-year average and second lowest in history since statistics started in 1973. The all-time low was 153.1 mm in 2000.

Water stored at reservoirs stands at 57 percent of the annual average, the agriculture ministry said. Geoynggi and Chungcheong provinces have been hit hard by a drought which is now scorching many areas nationwide.

Moon has ordered a probe into any wrongdoing in decision-making and execution of taxpayers' money related to a 19 billion US dollar project pushed by ex-president Lee Myung-bak (2008-2013) to dredge, dam and beautify the four rivers.

The project has been the target of controversy and policy debate. Environment activists have insisted it was riddled with costly flaws and aggravated river pollution. As water became stagnant behind the dams, the level of organic pollutants surged above pre-construction levels, auditors said in an earlier report.