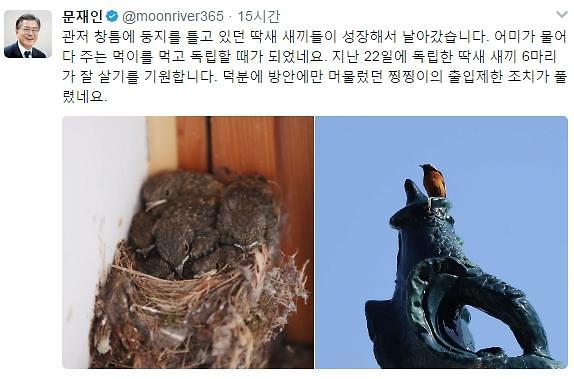 ​
A pet cat raised by President Moon Jae-in has gained freedom, nearly ten days after being locked in an isolated room to protect a flycatcher nest in a narrow space between double panel windows of the presidential residence.

The cat named "Zzing Zzing" was allowed to stroll out of the room only after the bird family left the nest on May 22, Moon wrote in his Tweeter. "Restrictions on access by Zzing Zzing have been rescinded."

Moon found a mother bird raising six chicks in the nest located at the corner of the double windows when the cat moved to the presidential residence on May 14, two months after the constitutional court upheld the impeachment of his predecessor, Park Geun-hye, to expel her from office.

The president said he had to restrict the movement of his cat which used to catch birds in his rural home.