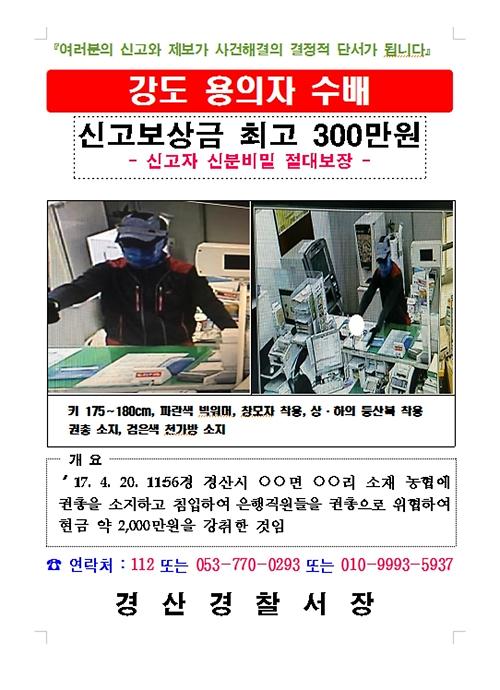 
A masked gunman carrying a sack of stolen money on his bicycle was on the run from police Thursday after robbing a small provincial bank. Police believe the robber may have used a home-made pistol for his five-minute crime to steal about 17,580 US dollars.

The man wielding a firearm stormed into a small bank in a satellite village of Gyeongsan some 250 kilometers (155 miles) southwest of Seoul and ordered bank clerks including one man and two women to fill his sack with money. The bank was too small to have security guards and there were no customers at the time.

A round of shot was fired toward a photocopier to scare the clerks but no one was hurt. When the sack was filled up with bank bills worth about 20 million won ($17,580), the robber locked them up in the bank's vault and disappeared riding a bicycle he rode to the crime scene.

Police are searching through a nearby industrial complex where many foreign workers are working after bank clerks testified that the gunman was not fluent in Korean. Police offered a cash reward of three million won in their wanted poster that showed a CCTV image of a man wearing a hat, a bicycle mask and an outdoor jacket.

Armed bank robbery is rare in South Korea because of tight restrictions on firearms. Selected ownership is allowed only for game hunting and sports and the owners are required to take cyclical license tests and keep their weapons at police stations.